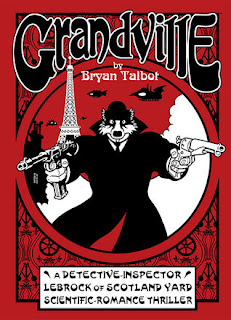 In this alternate history graphic novel, Britain lost the Napoleonic War and fell under French rule for decades. When it was finally cut free, it remained a minor nation connected to France by a bridge. The relationship between the two nations was strained. The story begins with the death of a diplomat, which brings Detective Inspector LeBrock of Scotland Yard into the story to investigate.

It's not just the political history that is different here. This is a steampunk world with flying dirigibles, steam carriages, automatons, and anthropomorphic animals. The only humans in the story are menial workers referred to as "doughfaces." They're described as "a hairless breed of chimpanzee that evolved in the town of Angouleme, near Bordeaux. Never granted citizens' rights." The other characters are various animals, all dressed up in clothes. Weirdly though, there are anthropomorphic dog characters, but then other dogs that just look like regular dogs on leashes, being walked by clothes-wearing animals in top hats. It's kind of strange.

DI LeBrock, a badger, was accompanied by Detective Ratzi, a very dapper rat with a monocle and a cane, who I was rather fond of. There's much character development though; this is a more plot-driven story. As the pair investigates the diplomat's death, reported as a suicide but most assuredly not, they begin to uncover more suspicious deaths that had been reported as suicides and which were all connected to a political plot. It was a pretty good story and I liked this strange world of animals and steam power and robots.

The art is similar to Talbot's other books and I quite like it a lot. It's detailed and vibrant and pleasing to the eye. 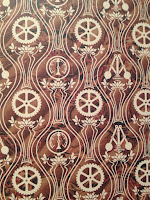 Talbot also designed the endpapers, which are gorgeous as you can see on the right.

I've had this book on my shelf since impulsively buying it several years ago at a local comic book store. I loved his books The Tale of One Bad Rat and Alice in Sunderland, and he even co-authored the informative Sally Heathcote: Suffragette. So I had reason to snatch it up when I did. I can't explain, however, why it has languished on my shelf for so long. For a while there I had completely forgotten that I owned it. Luckily, I came across it while planning what to put on my 2017 Personal Reading Challenge and made a commitment to read it this year. Mission accomplished!
Posted by 3goodrats at 7:30 AM