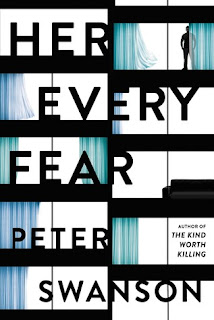 Kate Priddy has always been anxious, but a few years ago a traumatic experience with an ex-boyfriend put her over the edge. She is finally ready to leave the safety of her parents' house and agrees to apartment-swap with a second cousin she's never met. He'll come to London for work and stay her flat; she'll travel to Boston and stay in his Beacon Hill apartment and take classes. But the day after she arrives, the next-door neighbor is found murdered. Did her cousin Corbin have something to do with it? And what of the kind but somewhat-creepy neighbor Alan, whose apartment gives him a perfect view through the murdered woman's windows? Kate doesn't know who to trust, and neither do we.

Everything about Kate's experiences were tinged with creepiness. Because she had been subject to violence in the past and was still haunted by it, she often doubted her instincts. She would hear a sound or find something out-of-place in the apartment and grow suspicious, but then assume she was just being paranoid. She also had compulsions whereby as soon as a thought entered her head - like when she found a key to Corbin's basement storage unit and wondered if it contained clues - she had to check on it. If she didn't, she would be convinced something dark was lurking there. The whole setup just added to it: she's staying in a cousin's apartment but has never met him, there's a cat that comes and goes throughout the building, sneaking into apartments whenever he feels like it, Alan Cherney across the way admits he used to watch the murdered woman through her window, and a mysterious man who claimed to be a good friend of the victim starts hanging around, chumming up to the building's residents. So many things add to the creepy atmosphere and the feelings of uncertainty experienced by more than just Kate.

I really want to talk about Corbin and his story, but I'll have to reserve that conversation to have with someone who's read the book because it's too good to spoil. Let's just say I had some conflicting feelings about this cleverly-crafted character.

This plot involved a lot of violence against women, the sort we sometimes hear about in the news. A man is spurned or humiliated by a woman and lashes out, maybe at that woman or just women in general (because we are all the same.) It's especially sickening because it's so real. But it goes even farther. There is more than one murder in this novel, and we get parts of the story from the perspective of a murderer and I found it incredibly disturbing. It was worth it in the end, but be warned if your tolerance for vileness has limits.

I was very tense the entire time I was reading this suspenseful story. Kate was a fantastic protagonist who I rooted for. I didn't know who else to trust. Alan seemed nice enough so I hoped that he was a good guy, despite being a little off. The whole premise of the story was great, and it was executed very well. If you can stand a lot of violence and creepiness, I highly recommend it. I'd also encourage you to check out Swanson's last novel, The Kind Worth Killing.
Posted by 3goodrats at 8:00 AM