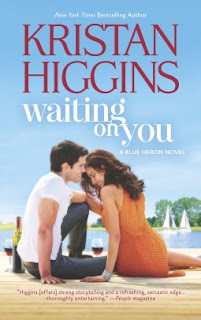 Like the first two books of the Blue Heron series, Waiting On You takes place in the small town of Manningsport, NY. This time, it is local bartender Colleen O'Rourke who takes center stage. Colleen prides herself in being a matchmaker, but hasn't had a relationship herself since her heart was broken by Lucas Campbell. Now she is focused on fixing up the athletic but awkward Paulie Petrosinsky with local gorgeous womanizer Bryce Campbell, who just happens to be Lucas's cousin. But Bryce's father is not doing well at all, which brings Lucas back to town, and for Colleen this is both upsetting and exciting.

Colleen's past relationship with Lucas was revisited in a series of flashbacks including their explosive breakup when Colleen learned that he knew about her father's affair and kept it quiet. A few months after their breakup when she had cooled down and was receptive to seeing Lucas again, she learned he was about to be married. Years later he is divorced and only back in town for a limited time, but the two are irresistibly drawn to each other. Colleen may be able to forgive him for his past mistakes, but she is not willing to have her heart broken again. She won't leave Manningsport, where her business is the heart of the town, and Lucas won't leave Chicago where his sister and her children live.

There was a lot else besides their romance going on in this book. Colleen's father and step-mother have a 9-year-old daughter, who at her tender age already isn't thin and pretty enough for her mother. Colleen's mother still isn't over her ex-husband but might be ready to try at romance again. Lucas's aunt is treating her dying husband poorly, just as she treated Lucas poorly after his parents died and he had to be raised by his aunt and uncle. Meanwhile, Bryce is a drifter who lives in his parents' basement and can't manage to keep a job. He seems, frankly, pretty dumb. But the ladies love him, including Paulie, who is totally not his type (she's more interested in lifting weights than primping to look nice for guys like him) yet has been smitten with him for years.

One of my favorite aspects of this story was how both Colleen and Lucas were involved in caring for an older relative in declining health. Lucas's Uncle Joe had failing kidneys, but it was cancer that was killing him more quickly. Colleen's grandfather had Alzheimer's and she visited him frequently at the nursing home where she worked part-time. (Before opening a restaurant and bar with her twin brother, she had gotten some nursing training.) Both Colleen and Lucas visited their older relatives frequently and were compassionate and attentive.

Like the other books in the series, Waiting On You was frequently hilarious. It got a bit over-the-top madcap at some points, like when Colleen decides to cook dinner for Lucas and manages to screw up every single step of the way. I appreciate that the characters have healthy senses of humor and don't take themselves too seriously. It makes them more realistic and genuine. When Colleen's friend Faith remarks on why men are afraid of Colleen she mentions her twin brother, at which Colleen quips, "I know. I should euthanize him."

I also found it interesting that Colleen, while a much-loved bartender, also had a (completely earned) reputation for sleeping around. I'm not sure her reputation was worked into the plot very well, because it mostly seemed like she had a lot of respect, until the subject of her sex life came up, and then things turned a bit more negative. I'm honestly not certain whether or not it was realistic, but I appreciate that a romance novel heroine was allowed to be human in this way.

Waiting On You is firmly in the sub-genre of small town contemporary, with dogs. (I'm pretty sure "with dogs" is a romance sub-genre.) I didn't mention the dogs because they're not integral to the plot, but Colleen has an Irish Wolfhound named Rufus, and Paulie has several rescue dogs because Bryce volunteers at the shelter (the only gig he can stick with.) I'm trying to decide how this book compares to others in the series. I think the actual romance part of this one wasn't as good as the previous books, but it had a lot of great stuff about family and friendship, which definitely counts for a lot. All in all, I found it a fun and satisfying read, and will likely continue with the series.

I can now check off the "Romance" square in Winter Bingo! Please notice that it's nowhere near the one other square that I have checked off. 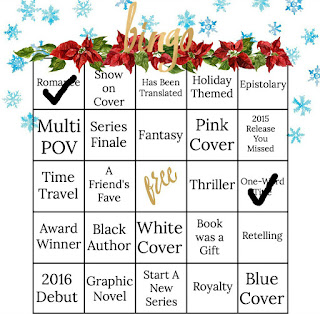