The Lady Traveler's Guide to Scoundrels and Other Gentlemen

The Lady Traveler's Guide to Scoundrels and Other Gentlemen (Lady Travelers Society #1) by Victoria Alexander (2017), narrated by Marian Hussey 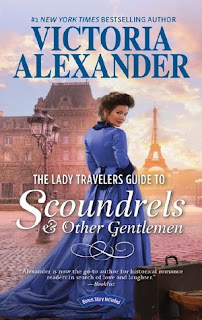 The party includes Derek, India, and a couple who served as chaperones, and they begin by going to Paris as that is where India's cousin's last letter was sent from. They decided to try to find out whether or not she was still in the city and if not they'd then go to the next destination on the itinerary. This must have been in 1889 because the Eiffel Tower was new and the Paris Exposition was happening, so they couldn't get a hotel. They instead stay with Derek's step-brother Val, who was even more of a rogue than Derek (but was also actually a good guy.)

The trip is not off to a great start when India's trunk goes astray and she is left in fashionable Paris with only her dowdy grey traveling dress. Her chaperone lends her some clothing, but it's far showier than the practical clothing India usually wears. This might be a good time to mention that India is very set in her ways, completely practical, and rather a prude. She's almost 30 and therefore a confirmed spinster, which suits her just fine. She's not at all the sort of woman Derek is used to being around, but despite how different they are they do become friends on this journey, and of course that friendship turns into something more.

I heard of this described as a romance, and I suppose it is that, but almost nothing happens in that direction until about halfway through. Up until that point, the story is occupied with the disappearance of India's cousin, the nefarious doings of the Lady Travelers Society, Derek's reputation and attempt to get back on the straight and narrow path, and all the logistics of the trip to Europe. Some of the Goodreads reviews said that the story was very slow to start, but I think they mean the romance because I think there was a lot happening aside from that. To me, this is less a romance novel than a work of historical fiction that has a romance as one of the plotlines.

But who cares how it's categorized. It was an engrossing, fun story that I enjoyed a lot from the very beginning. I loved India, despite how rigid she was. Raised by her cousin, she was determined not to be a burden, so she had been working for 8 years as a secretary to a man she considered a friend. She was smart and capable and more open to new experiences than even she realized. Because of her unfortunate background, I think she never expected much for her life and just decided to be satisfied with what she had. Derek was a bit put off by her at first - neither of them liked the other until they decided to make an attempt at friendship since they'd be traveling together for a while. He was really a decent guy who had been a bit irresponsible in his youth and had earned a reputation. But he was sincerely trying to put that all behind him and be a responsible adult.

Part of what made this book such a great experience was the narration of Marian Hussey. Her clipped British accent was just perfect for India Prendergast, but she read the other voices very well too. I listened to the bulk of the book while driving to and from Burlington, VT for a conference, which was close to 7 hours of listening time. There's little that is better than using a long drive to listen to most of a book. What a great use of time, and I can't think of a better way to make a drive pleasant. I probably won't be able to ever think of this book without seeing colorful fall leaves.

This is the first in a series, so yay! I hope the same narrator reads the future books, in which case I'll be experiencing them all on audio. If you like historical novels about independent women where romance is a large part of the story - but not the whole plot - I suggest you try this book.
Posted by 3goodrats at 7:16 PM