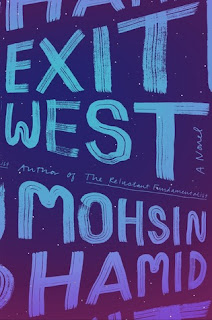 In an unspecified country, Saeed and Nadia meet and begin seeing each other as war closes in around them. But there are rumors of doors appearing that will take you far away to other countries, if you can find someone you can pay for the privilege of using one. They finally decide it's worth the risk, and they leave everything behind and step through, not knowing where they'll end up.

Where they land initially is Mykonos, in Greece, but it's not their last stop. Wherever there are doors, there are refugees like themselves trying to escape their homelands in search of a better life. Migrant communities rise up around the world, shifting the population and creating lots of competition for housing. As Saeed and Nadia navigate this new landscape, they initially grow closer and think of themselves as married, but as time goes on and their environments change, so do they, and both must think about what future they want.

Hamid's book is very short and I read it in just two days. The writing is lovely, and though filled with many lengthy comma-laden sentences, is rather easy to read. It's not especially detailed or descriptive, but just enough to give it a bit of atmosphere. I'm definitely left with questions about the doors and the ways they've changed the world, but the story here is really about the relationship between Saeed and Nadia. Even here, I felt like I was just scraping at the surface of these characters; I did get a good sense of their relationship, which was the point, but we don't get a lot of details about their characters' inner lives, past experiences, quirks, or internal struggles. They seem real enough, but like people you're seeing at a bit of distance. This really isn't a criticism, as these are all stylistic choices, but I think it's worth mentioning that this book isn't as meaty as my usual fare.

As I mentioned, the doors were never explained, and that's ok. What we know is that they began appearing at some point, and continued to appear (or be found) for a while at least and seemed to be permanent once they appeared. The result was essentially an opening of all borders, which is fascinating to think about. Of course people left the war-torn areas and went to more stable and wealthy areas, causing quite a shift in population. The doors that were found would quickly be taken over and guarded, and whether or not they could be accessed depended on who was guarding them. I wish we got more about the results of these population shifts, but if all my questions were answered this would have been a much longer and completely different book and I don't think I'd actually want that.

Exit West was a nice little break from my usual kind of reading, but I'm not sure if I'll remember it at all six months from now. However, I did quite like the short time I spent reading it.
Posted by 3goodrats at 9:48 PM