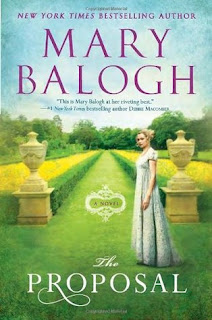 A young widow named Gwen has just quarreled with the friend she's staying with, and is out walking the beach when she falls, twisting her ankle. Luckily, an imposing stranger named Hugo is standing nearby at the time and rescues her. He takes her back to the house where he's staying with some friends who all met when they were recovering from their war experiences and injuries and now return for a get-together every year. Gwen doesn't want to impose, but her injury is bad enough that she shouldn't be moved. She and Hugo dislike each other from the start, but they begin to warm up to each other quickly. It can't go anywhere though, as she is an aristocrat who does not want to remarry, and Hugo needs to marry now that his title requires it but he's determined to marry someone in his own social sphere.

The premise doesn't sound like anything special, but these two characters make this very different from any romance I've read. These are no young, naive virgins, blushing at any hint of impropriety; both are seasoned and mature, and not afraid to speak of their desires. For one thing, they have sex fairly early in the book, when they still rather dislike each other, and have no illusions that it will lead to anything else. You don't see that very much in historical romance. They have scars from their past, hers in the form of a permanent limp and his of a more internal sort. Because of the kind of people they are, this isn't an all-consuming, passionate romance with dramatic confessions and tears of joy and all the typical trappings of the genre. No, it's like a story about a couple of people you know who develop a mature affection and you're really glad they found each other. It's satisfying.

So what was the tension, the thing that kept them apart? Primarily, it was class. I mean, Gwen didn't want to get married again anyhow. Her first marriage wasn't awesome and I think the fact that she was single made her think she had a second chance to live her life the way she wanted to. She didn't want to leap back into another lifetime commitment. But the real hurdle to overcome was that she was from the upper classes and Hugo earned his title in the war, and inherited his wealth from his businessman father. His people were different from hers, and the life he wanted was on his farm with the lambs and his garden, not in London at fancy boring parties.

In these historical romances, the characters are pretty much always aristocratic. Occasionally there will be an outlier, but this is the first book I've read where they really get into what that means. For instance, when Hugo invites Gwen to stay at his place with his family, he mentions the difficulties of all his relations getting time off work. And his sister Constance, who Gwen introduces to London society, can't get over how idle all the men are. They don't have jobs or any purpose - they're boring. She had a great time at the parties, but when it comes down to it, she's probably going to marry the ironmonger she's known all her life, a good hardworking guy.

I've been in a bit of a reading slump recently, having started and stopped a few different books before picking this up. I spent probably a full week or so reading it, as I was spending much more time catching up on tv. At first I thought it was just ok, but once I started getting to know these characters and their lives - and there's a lot here I didn't even get into about their dark histories that have formed who they are - it became clear that this really stands out among historical romances for it's realism. I was intrigued by the whole idea of this series, as several of the main characters have disabilities, but there's so much more here that is interesting and thought-provoking and refreshing. After trying this one I suspect I'll read more from this series.
Posted by 3goodrats at 7:30 AM