The Power by Naomi Alderman (2016), narrated by Adjoa Andoh 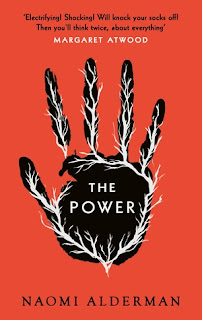 The world has suddenly changed: teenage girls now carry a power within them to deliver electrical shocks. Female babies are now born with it; and it's possible to awaken the power even in older women. It's game-changing and we see this massive shift primarily through four characters: a young Nigerian journalist; a London teenager from a rough family; a foster girl being raised in an abusive family; and an American senator. The story is framed in a far-future exchange between a male author writing a novel about the "great cataclysm" and his female agent.

What's brilliant about this book is that the whole idea is that whoever has power will abuse it and be in control and oppress others. The far-future framing parts show a world in which roles are reversed. It is men who aren't taken seriously, women who are in charge, and they're convinced it has always been this way. It wouldn't even make sense for men to run things, they think. It seems ridiculous, the way men are viewed, which highlights exactly how ridiculous the treatment of women in our world is.

Once I got the characters straight, they solidified into real people for me, and I was so invested in everyone getting through the very dangerous times unscathed. Allie, once she killed her foster father and left her abusive home, followed the voice in her head and began a new religion, dubbing herself Mother Eve. Streetwise Roxy witnessed her mother's murder and vowed to take revenge on those responsible. Margot is a politician whose teenage daughter helps her awaken her own powers, which she must initially hide out of fear it will hurt her political ambitions. Tunde was a rather aimless young guy who began recording footage of girls using the power, and then became dedicated to documenting everything about this new world landscape, as great risk to himself. At first, this new power was seen as something scary that needed to be contained, and leaders scrambled to make plans to deal with it. But soon it became obvious that the power was there to stay, and that women would use it to hurt men and gain control.

Listening to the audio version meant being a bit disoriented during the first several chapters as they switched back and forth between characters. Once the story returned to the first character, I couldn't remember anything about her character and had to go back and listen to parts of the first chapter again. So in that way, it probably would have been a good choice for me to read in print. But then I would have missed out on the excellent narration by Adjoa Andoh, who is extremely talented at all kinds of accents and did an amazing job with all the characters' voices.

I kind of wish I had read this for a book group because there's just so much to discuss! However, two of my coworkers have read it and I think we'll spend some time talking about it now that I've finally finished it too. Right now, in the current political climate in the U.S., and with all the sexual assault allegations against powerful men coming to light, is probably the perfect time to read a book about women giving men a taste of their own medicine.
Posted by 3goodrats at 1:04 PM