The Inexplicable Logic of My Life

The Inexplicable Logic of My Life by Benjamin Alire Saenz (2017) 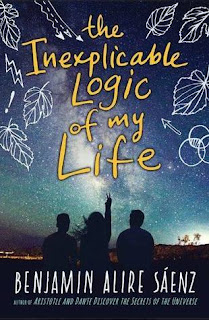 Salvador has grown up with his adoptive gay Mexican father, and they've led a pretty consistent comfortable life until now. Sal's temper is starting to get the best of him and he's getting into fist fights at school, his grandmother Mima is suddenly very ill, and his best friends Sam and Fito are going through their own difficult situations. In addition to the major issues, Sal has a college admissions essay hanging over his head. He struggles with it mostly because he can't figure out why he's special (which I think many of us can relate to, especially as teenagers.)

Sam and Sal are like brother and sister, and I loved their relationship. I especially loved that there's a book with a girl and boy who are friends and there is no romance whatsoever between them. Their friendship was very cute too: they texted each other constantly, even when they were in adjacent rooms, and they often came up with a word for the day (wftd.) They also played a game of "What if?" One person would ask a question like "What if we had never met?" and the other one had to come up with an acceptably creative answer by the end of the day.

Initially Sam doesn't like Sal's friend Fito, but as it turns out she just didn't really know him and as soon as they start spending more time together, they also become good friends. Sam and Fito both have mothers with very serious problems and their relationships are complicated. Sal doesn't have a mother at all, so this is something they all sort of bond over.

Nature vs. nurture came up a lot in this story. Sal has been thinking a lot about his biological father recently, worrying that he somehow inherited this new tendency to fight. He doesn't know who his father was, and his mother died when he was only three years old, so he doesn't even remember her. The family he grew up with is the only family he knows. Not only is he not biologically related to them, but he's also a white kid in a Mexican family.

Sal's family was great, but especially his dad, Vicente. Saenz writes amazing parents, as I discovered when I read Aristotle and Dante Discover the Secrets of the Universe. Many people will recognize Sal's house - the household teenagers are drawn to, where they feel comfortable with the adults in residence and, more importantly, where they feel welcome to hang out and be themselves. It becomes a hub, and Vicente jokes that he collects 17-year-olds.

Les you think it's all happy and uplifting, I should mention that there was a lot of death in this book. It didn't feel piled on though; it was spread out a bit so the characters had a chance to deal with it. These kids were talkers who worked through their feelings and dealt with the turmoil going on inside of them. Perhaps it's not entirely realistic, but if nothing else it's a great model for how to handle your life.

In a lot of ways, this is an idealistic book (as was Aristotle and Dante) but it still felt genuine. Even though a lot of bad things happened in the course of the story, it's still uplifting because of the way the characters all took care of each other. Sometimes that's exactly the sort of book you need.
Posted by 3goodrats at 7:35 AM