So You Want To Talk About Race 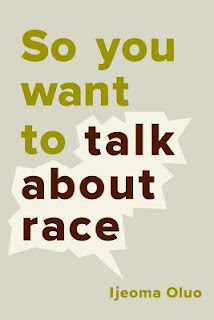 As it turns out, this book really is a guide for talking about race. I wasn't sure, I just knew that if Oluo wrote it, I wanted to read it. I follow her on Twitter and have read some pieces she has written, and she's brilliant, thoughtful, clear-headed, and concise. In addition to all her sensible advice, she shares her own experiences about, for example, being followed around in stores, and having to explain to her son why he can't play with a toy gun outside although his white step-brother can. She also helpfully includes information and statistics on things like income and police brutality as it relates to race.

The structure of the book is based on questions she has been asked. Chapters include "What if I talk about race wrong?", "What are microaggressions?", "What is cultural appropriation?", "Why can't I touch your hair?", "I just got called racist, what do I do now?", and "Talking is great, but what else can I do?" Each chapter is short, succinct, and filled with advice. I don't want to try and pick out bits of it to share because I think it's really important to read it in context.

But I will share the other actions - from the "what else can I do?" chapter - which is always what I want to know. They include things like voting in local elections, speaking up in unions, supporting POC-owned businesses, giving money to organizations working to fight racial oppression and support communities of color, boycotting businesses that exploit workers of color, supporting music, film, television, art, and books created by people of color, and supporting increases in the minimum wage. These should all be easy, and it's really the least we can do.

I also appreciated how inclusive the book is. She talks about LGBTQ people, people with disabilities, and some of the specific problems faced by Asian-Americans. Did you know that 41-61% of Asian-American women experience physical and sexual abuse, which is TWICE the national average for all women? I didn't, and this is a horrifying omission from our conversations about feminism, and is exactly the sort of thing we mean when emphasizing the importance of intersectionality.

There is so much for most of us to learn from Oluo's writing. I consider this required reading for anyone wanting to take part in the current conversation about race (and we all should be doing so.) It's also the kind of book I want to keep referring back to, so although I returned my copy to the library I'm likely to purchase one to keep for myself.
Posted by 3goodrats at 3:10 PM

Labels: books, ijeoma oluo, nonfiction, reviews, so you want to talk about race