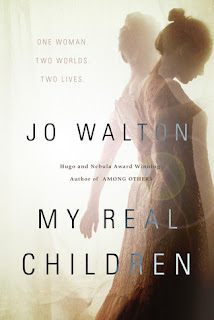 Two of my coworkers read and recommended this book, which I had otherwise not even heard of. The story opens with an old woman suffering from dementia in a nursing home. She has memories of two distinct versions of her life and doesn't know which one is real. She think she remembers a recent visit from one of her kids, but then also remembers a kid from the other version of her life visiting as well. In alternating chapters, we are told both stories of her life.

They are the same up to a point, but diverge with one phone call: her boyfriend Mark telling her that if they want to get married, it's now or never. In one life, she jumps at the chance to marry him, and they have four children and an unhappy relationship until she is finally rid of him and starts living a more fulfilling life, albeit pretty life. In the other version, she turns him down and ends up in a long-term relationship with a woman named Bee, with whom she has three children, spends a ton of time in Italy, and has a career writing travel guides. It's clear that one version is superior in terms of Patricia's personal life, but the thing is that world events are also different. In the story in which her life is unhappy, the world is fairly peaceful and AIDS has been cured. In the world in which her life is good, there is nuclear war.

It reminded me a little bit of Maybe In Another Life by Taylor Jenkins Reid. What I liked about that book was that the two versions of her life were both still pretty good, whereas in My Real Children one of the versions was definitely a much better life. That makes me a little anxious about the difference that your choices can make, because it's sort of like saying that you can make a wrong choice. I like the idea that although some of our decisions are better than others at the time, ultimately one little decision won't have a cascading effect that ruins our lives. Still, I found My Real Children to be a better book. I just really enjoyed reading about the characters and their lives, particularly since it spanned decades. It made me feel like I really got to know Patricia, both versions of her.
Posted by 3goodrats at 11:58 AM