The Rose Garden by Susanna Kearsley (2011), narrated by Nicola Barber 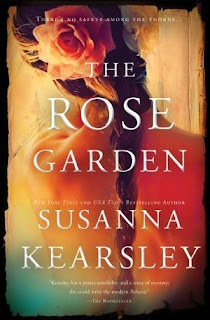 It's funny. I never rate Kearsley's books very high (on Goodreads I usually give them 3 stars, occasionally 4) yet they've become my comfort reads. I had purchased The Rose Garden on sale through Audible and forgotten about it until I was scrolling through my library one day. I immediately thought about English country gardens, history, romance, and that ethereal time-slipping that is in all of her novels and realized it was exactly what I wanted at that moment.

The protagonist is a woman named Eva who just lost her sister to illness, and she returns to Cornwall to scatter her ashes in the place where they spent their childhood together. She is staying with old family friends, but begins traveling back in time to the early 18th century where she meets previous inhabitants of the house. She can't control when she moves back and forth in time, and it's a bit jarring to suddenly appear in a place wearing clothing from the wrong time period. As she spends more time in the early 1700s, she begins falling for the smuggler Daniel Butler, and questioning where her true home really is.

This is the first book of Kearsley's I've read in which the main character actually travels in time. In the others, it's more like she will have a very close connection with someone from the past and maybe experience their story, but as that person, not as herself. Here, Eva showed up and interacted with people from another time, having to explain that she is from the future and being careful not to give them too much information or do anything to potentially change the future. Kearsley didn't dwell on the mechanics of the time travel, though it was connected to the house. It's not clear why not everyone there traveled through time, but that's not important. It's really about the life she lived in both places and the people she knew there.

I found it a little strange that the people she met in the 1700s didn't ask her about the future, and that no time was spent speculating on why it was happening, and why to her. It was also convenient that she never happened to disappear or reappear in front of the people in the current day, though a few people saw her come and go in the 1700s. But I can't really say that there are complaints as I think a lot of conversations about what was happening would have detracted from the real story.

Late in the book we learn some things that delightfully tied various bits of the story together. Of course I don't want to spoiler anything, but I loved how it all wrapped up. (Well, mostly.) I enjoyed this book the whole way through, and found Nicola Barber's narration perfect for the story.
Posted by 3goodrats at 3:24 PM