All the Beautiful Lies

All the Beautiful Lies by Peter Swanson (2018) 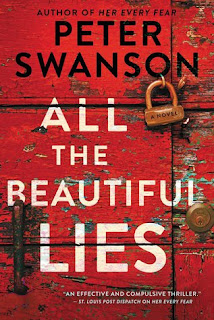 Just days before his college graduation, Harry Ackerman learns that his father has died. He returns home to Maine, to his stepmother Alice, where he learns that his fathers death may not have been an accident. A mysterious young woman attends his father's funeral, and Harry befriends her because he's convinced there's a connection. Meanwhile, his relationship with Alice is a bit awkward as Harry tries to dampen the attraction he's always had to her. As the story progresses, chapters alternate between the current time and Alice's youth, until the full story is revealed.

In true Swanson fashion, the twists and turns the story takes are often surprising and in that way it lives up to his other books that I've read, The Kind Worth Killing and Her Every Fear. I think I was less shocked at some of the reveals this time, but that's likely because I'm familiar with Swanson's work and I know by now to expected the unexpected. I had a lot of fun guessing what was going on.

Unlike with his other books, I got mightily creeped out for a while here. I tend to read before bed and I had some strange dreams, and once I even had to stop myself and put the book down for the night because I saw where it was going and I wasn't ready to experience it just before sleeping. I could barely put the book down, but was also motivated to finish it quickly so I wouldn't have many sleeps while reading it. Once I got past a few of the parts around the middle of the book, I was less affected by the rest. But of course I kept plowing through it because it was good and I needed to find out the truth!

Aspects of this story will likely turn off some readers who are easily icked out by certain taboo relationships, and there were moments where I wondered at some of the coincidences. But ultimately it didn't much matter and the story was completely engrossing. I think I liked his other two books more, but just by a hair. I can't imagine why Swanson isn't more popular. There was a waiting list at the library when it came out, but it was modest. I know crime is popular and in my opinion Swanson's books surpass - or are at least equal too - those by popular authors like Ruth Ware and Gillian Flynn. If you like crime novels, Peter Swanson is a must-read.
Posted by 3goodrats at 8:26 AM