The Lottery and Other Stories

The Lottery and Other Stories by Shirley Jackson (1949) 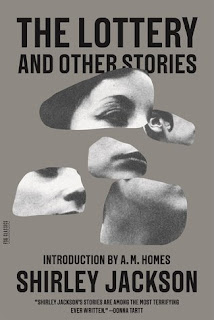 Although I read We Have Always Lived in the Castle and the short story "The Lottery" when I was a teenager, it is only recently that I've become somewhat of a die-hard Shirley Jackson fan. I even read a biography about her a couple of years ago. So this year I decided to revisit "The Lottery" and read some of her other short stories as well.

The stories are divided into four sections. In the first section, most of the stories are about someone taking liberties in someone else's home. For instance, in "Like Mother Used To Make," a meticulous man has prepared dinner to share with his neighbor, and while they're eating someone enters their building to visit his neighbor. She ushers him into the apartment, inviting him to join them, and then pretends as though it's her own apartment and she has cooked the meal. The man who actually lives there, is left to go to his neighbor's messy, disordered apartment and stay there until her friend leaves and he can return to his place.

The second part seems to be about propriety and convention, and the way people in communities judge each other and their behavior. A couple of them were about race and I'm sorry to say that things haven't changed as much as they should have between the present day and time in which the stories were written. "After You, My Dear Alphonse" begins with a woman's young son bringing a friend home for lunch. The friend is black, and the woman keeps making assumptions about him and his family. She asks questions and seems surprised at the answers, like when she learns that his mother doesn't have a job. Her own son points out that she herself doesn't have a job, so why would Boyd's mother? She then assumes that he has lots of brothers and sisters. It culminates with the woman trying to give the boy some of their old clothes, and when he says that they have plenty of clothes, she gets angry and points out that "many little boys like you" would be grateful for the offer.

The theme of the third section is less clear to me, but the stories contain disorientation or unease or minor slights against others. I can't pick a favorite from this section, but I think I was most struck by "Seven Types of Ambiguity," in which a couple visits a bookstore hoping to buy large quantities of books, sets of books, presumably more for decorating than reading. While they're there, a boy comes in to spend time reading a book that he comes in for every day but hasn't been able to buy. Before they leave, the couple add that book to their purchase.

The final section ends with "The Lottery," but also contains several other stories about fear or being trapped. (Honestly, it's an interesting but difficult exercise to look at groups of stories and try to coax out the common thread.) In "Pillar of Salt" a young woman looks forward to vacation in New York with her husband and enjoys it for a while, until they find a disembodied leg. The incident casts a pall over everything, and the woman comes a bit unmoored, suddenly afraid of everything around her until one day she can't even manage to cross the street by herself and ends up calling her husband to come get her. Now that I think of it, the stories in this section all start out with a fairly everyday vibe and then take an unexpectedly dark turn.

"The Lottery" is the story Jackson is undoubtedly most famous for, but stands out from the other stories in the book in that it takes place in a kind of dystopian village and the others are more firmly rooted in our own society. But some of the themes are the same - societal norms, traditions, the expectation to conform. Don't go into this book thinking the stories will all be like this one, but there are definitely some common threads. There were only a couple of stories in the collection that left me feeling like I had no idea what they were getting at, and I imagine that's my own shortcoming, not Jackson's. Mostly, I found a lot to think about, particular in the ways our culture has changed, and how it has stayed the same, since Jackson's time. I'm very glad to have finally read this collection.

This book is part of my 2018 TBR Pile Challenge. It's actually one of my alternates, though now I don't know why it wasn't on my main list. It also feels like I shouldn't be reading my alternates before I've even tried reading all of my regular list, but this is just what I felt like reading at the time. Plus, somehow I managed to put a lot of long books on the list, and I wanted something shorter to read. At any rate, the challenge is going very well so far. Check the page I linked to above to see my whole list, and links to posts about the books I've read so far.
Posted by 3goodrats at 10:07 AM

As a die-hard Shirley Jackson fan, I really enjoyed reading your review. I read this one last year, and enjoyed it very much. For me, "We Have Always Lived in the Castle" is one of my all-time favorites. I found a copy of three of her early novels in one book as well as another collection of short stories. Here's hoping I get around to those soon!