The Girl Is Murder

The Girl Is Murder by Kathryn Miller Haines (2011) 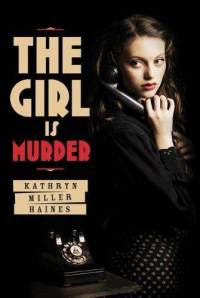 After her father lost his leg at Pearl Harbor and her mother committed suicide, Iris Anderson found herself transplanted from her posh private school on the Upper East Side to a public school in her new neighborhood on the Lower East Side. Her father was struggling to perform his work as a private investigator with his new disability, so Iris took it upon herself to help him out, whether he wanted her to or not. (Hint: he didn't.) After a boy at her high school went missing and her father was hired to investigate, Iris decided to conduct her own investigation and found herself involved in a crowd with a bad reputation, opening up a whole new social world to her.

Iris's world is complicated, trapped as she is between her posh uptown life, and her new downtown life, not quite fitting in either place anymore. She also walks a fine line between childhood and adulthood, wanting to help her father with his work because they need the money, but meeting his resistance at every turn because she is "just a child." Trying to fit in at her new school isn't easy either. The first people she meets are Pearl and Paul, a brother and sister who try to befriend her. Pearl is an outcast, especially vilified by the Rainbows, the tough-talking group that Iris befriends to try and track down their missing friend. The group takes Iris out to Harlem with them for drinking and dancing to a new kind of music that Iris has never heard before, but instantly loves. She finds herself lying to both sets of friends about different aspects of her life. Meanwhile, she's ignoring her old friend Grace from the upper east side because she feels like Grace is taking perverse joy in Iris's social descent.

Although marketed towards fans of Veronica Mars, this book reminded me more of Ten Cents a Dance by Christine Fletcher. Set in the same era, The Girl Is Murder included nice period details including contemporary slang expressions, tasty treats like egg creams (whatever those are), and featured boys in zoot suits, with a slight nod to the Zoot Suit Riots (which I always thought was just a song but was, in fact, an actual series of riots.)

The audio narrator was really fantastic, what with her New York accent and convincing dialogue. This was one of the better audio performances I've listened to, and I'm so glad I opted for this format. But I'm sure the book is great too, so however you like it you should give it a try!
Posted by 3goodrats at 6:56 PM

Funny you mentioned it. While reading your post, I was actually thinking, "This sounds exactly like the premise of Veronica Mars."

There are so few young adult mysteries out there (as the Forever Young Adult blog has pointed out) that I'm always happy to find one! And I do miss Veronica Mars a lot.