Bet Me by Jennifer Crusie (2004), narrated by Deanna Hurst 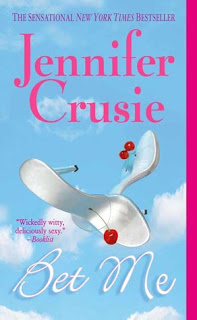 When we meet Min Dobbs, she is in a bar being dumped by her jerk of a boyfriend. She's upset, not because she loves him, but because now she doesn't have a date to her sister's wedding, which is only three weeks away. Later that evening, Min accepts an offer to go to dinner with a man named Cal Morrisey, even though she knows he only asked her out to win a bet. By the end of the evening, they know they can't stand each other and will never see one another again. But fate intervenes, and soon Min and Cal realize they are very much attracted to each other. However, Min doesn't want to take a chance on a guy she knows to be a heartbreaker, and the bet he made - or didn't make? - still stands between them and it lasts for a month, until just after her sister's wedding.

Min's first date with Cal was at a restaurant called Emilio's and this was part of the reason they kept running into each other. Emilio made amazing bread and chicken marsala and Min kept going back there, or ordering takeout that Cal ended up delivering. Another reason they kept running into each other is that on the evening of their first date Min's friend Bonnie and Cal's friend Roger fell madly, instantly in love. So they were bound to end up in the same places.

Min's two best friends had very different beliefs about love. Bonnie was a firm believer in fairy tales; Liza subscribed to chaos theory. Min was pretty cynical about relationships, as was Cal, but there was sort of a running joke that every time one of them insisted they weren't falling for the other one, they'd stub a toe, cut their hand, or somehow otherwise hurt themselves. It was pretty hilarious. In the meantime, Min's sister Diana was about to get married and Min knew there was something wrong. Because of her angst about having a date and fitting into her dress, this whole story centered around the wedding, and when it finally happened it was a pretty spectacular scene.

Min's mother was horrible. She was obsessed with weight loss and constantly admonished Min for not losing weight, reminding her to avoid butter, bread, and basically anything that is actual food. She also ordered Min's bridesmaid dress a couple of sizes too small intentionally and then got angry when it didn't fit.

Cal, on the other hand, found Min irresistibly sexy, not in spite of her curves, but because of them. At one point when she is trying to make "heart healthy" chicken marsala and it comes out terribly, and she reveals that a former boyfriend dumped her because of her weight, he says "Some things are supposed to be made with butter. You're one of them." I love Cal. He was this incredibly good-looking guy and Min didn't fit the image of the sort of woman he would be with, and I thought that was addressed so well. Don't get me wrong, though - he's not perfect. He's known for dumping women after just a few months, which is one of the tensions in their relationship. But he's such a great example of an imperfect yet appealing romance hero.

I also loved Min a lot. I like that she's this totally practical-minded person - I mean, she works as an actuary! - but she also has a weakness for cute, unusual shoes and she has a snow globe collection. I love the way her character develops throughout this novel, and how she realizes which of her relationships are healthy and which aren't. Her friends were great, too and I loved the roles her friends played in this story. She also wasn't afraid to speak her mind, which was incredibly well illustrated in the scene where she had dinner with Cal's stuffy, cold, pretentious parents. It was so satisfying.

Literally my only criticism of this book is that the characters ate so much chicken marsala that I got sick of it, and I've never even had chicken marsala. (At the same time, it made me want to try it.) Min and Cal also got rather ecstatic over Krispy Kreme donuts, which I find pretty similar to Dunkin' Donuts in that they're nothing special. Given that my only complaints about this book are related to the food, I highly recommend it.

I sort of can't believe I hadn't read this, or anything by Crusie, before. I definitely heard of her back in the late 90s or early 00s when I first was reading a ton of chick lit, and this is such great old-school chick lit! It's like old Jennifer Weiner or Jane Green or Marian Keyes. On the one hand, I can't believe it missed it! On the other hand, I'm glad I did so that I could enjoy it now. I kept hearing of this book specifically, and recently there was an episode of Smart Podcast, Trashy Books in which people discussed the book that got them reading romance and more than one person mentioned this one.

Have you read Jennifer Crusie? Are her other books as good as this one? This is the perfect sort of book for me to listen to on audio, so if you have any suggestions for similar books, please let me know in the comments!
Posted by 3goodrats at 7:30 AM