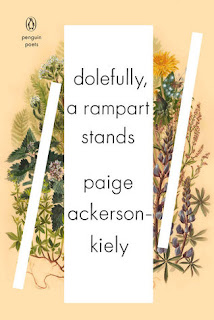 I was drawn to this book of poetry when I read that it was set in the rural Northeast. According to the description the poems are about "isolation, captivity, and vanishing." I can't ever get past the words of poetry to find the themes so I can't really talk about what I'm supposed to get out of this collection, I can only talk about my own response.

I was struck by the language of these poems, and by the unusual form of some of them. One of the earliest poems in the book, "The Lesson," is written like a prose paragraph. I didn't expect this, nor did I expect later another poem written in the same style that extended for 20 pages, one solid paragraph on each page. It's described in reviews as having a noir style which isn't how I would have thought to describe it, but I suppose it's apt. It's called "Book About a Candle Burning In a Shed" and it's about the investigation of the murder of a young woman. The narrator maybe be a police officer, and I alternately thought he was and was not the murdered woman's ex-boyfriend. I kept getting confused on that point. Although this poem went on a bit long for me and I couldn't quite make sense of it, I really liked the narrative voice.

Other poems written in a more traditional style stood out to me because of their vivid and unexpected imagery. Here's a bit I like from "Shine":

The stars do not eat my breakfast.
A man eats my breakfast. Like the stars
he cannot take care of me very well.
But oh does he burn.

I don't know why I like that so much, but I do.

"The Rose Bush" might be my favorite. I want to quote it in full, but will just share this part:

Dieback all the way back
before you were born ugly
in the cradle, pretty at the table.

Something about that sounds like a song, the whole poem does, and I want to keep reading it over and over. It appears fairly early in the collection and I think it was here that it all began to feel somehow familiar. When I was in high school I wrote poetry - not terrible poetry either, poetry filled with sharp images and words that just sounded satisfying when you put them together. Had I continued to write poetry, I'm convinced it would have been a lot like some of the poetry in this book. What a strange response to reading someone else's book, but there it is.

I want to just continue through the collection, quoting all my favorite passages here, but I'd be here all night re-reading the entire thing. Suffice it to say that I'm very glad I picked up this book. For a while there I was trying out various recently-published books of poetry and not really finding anything I loved so I almost cancelled my library request for this one, only changing my mind at the last minute.

I may come back to it again sometime, and I may seek out another of her books. One of them is titled My Love Is a Dead Arctic Explorer and I can't imagine anything with that title wouldn't be good.
Posted by 3goodrats at 8:15 PM