We Are All Shipwrecks

We Are All Shipwrecks by Kelly Grey Carlisle (2017) 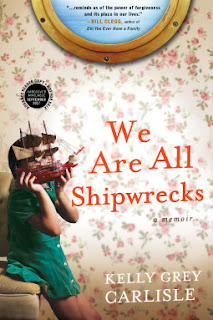 When Kelly was three weeks old, her mother was murdered. She grew up with her grandfather and his much younger wife, sometimes staying with her grandmother and her friend Dee. Her grandfather owned a porn shop and as he got older and less able to work, his wife Marilyn assumed most of the responsibilities of running the business. At one point he bought a boat and because of the costs of fixing it up, they ended up giving up their house and living on the boat full-time. In her memoir, Kelly Grey Carlisle documents her unusual childhood and adolescence, while trying to unravel the mystery of her mother's life and death.

Her grandfather, Richard Grey, was British and insisted he was titled, calling himself Sir Richard Grey. He claimed a lot of things about his life, some of which were true. Although he took good care of Kelly, he was an angry man, what some called verbally abusive. The little he told Kelly about her mother was not necessarily true. She had mixed feelings about her grandfather and so did I by the time I finished reading.

Marilyn put up with a lot, and I was struck by her devotion to taking care of Kelly. She married Kelly's grandfather because he was stable and she very much wanted a baby. Since she didn't have children of her own, when Kelly's mother was killed, Marilyn was the person who most wanted to take care of her. She wasn't happy with some aspects of her life and I really think she would have left had it not been for Kelly.

The idea of living on a boat in the marine seems very foreign to me, but apparently it's not that unusual. For one thing, they had lots of neighbors who also lived on their boats and they made up a pretty tight-knit community. While reading this book I happened across a new book called The Tiny Mess, which documents people who cook in tiny kitchens. Their living quarters vary from tiny houses to vans to converted water towers, but I was struck by how many people live (and cook!) on boats. They're primarily in Southern California, which is also where Kelly grew up. It's a whole world that I didn't know existed.

Mostly this book was slice-of-life in that there weren't major events or catastrophes she was documenting, but just what it was like to grow up the way she did. Always in the background though were the questions about her mother and the years leading up to her murder. Kelly got conflicting stories from family about why her mother was living on her own so young, and what her relationship with her family was like. As an adult Kelly got in touch with the investigators assigned to the case and finally learned some answers to her questions. Ultimately it was a satisfying story that explores themes about family, both blood-related and not.

We Are All Shipwrecks first caught my eye because of the title - I do love a good title - but it has languished on my To Read list for quite a while. It was the 2019 TBR Pile Challenge that finally got me to pick it up. If you're interested in delving into a quirky life filled with complex people and relationships, you may also enjoy this story.
Posted by 3goodrats at 12:26 PM