May Wrap-Up and Plans for June 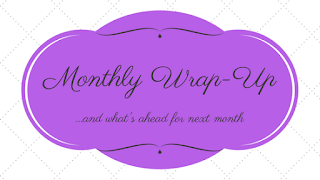 
I read a total of 7 books this month, including two for my TBR Pile Challenge- We Are All Shipwrecks and Eleanor Oliphant Is Completely Fine. Strangely for me only one was an audiobook, Pride by Ibi Zoboi. My bus commute has gotten nightmarish so I've been driving a lot instead and since it's a fairly short drive I haven't had as much listening time.

There are occasional mini-challenges as part of the TBR Pile Challenge and I won the last one! I got to pick a copy of a book from Book Depository and I went with Outlander. I couldn't find a trade paperback copy from the library that wasn't a movie tie-in version, plus it's so long I thought it would be nice to have my own. I'm picturing myself reading it outside this summer but honestly, I'm picturing myself reading many different very long books outside this summer and there just won't be that much time before the snow falls.


I've finished the third season of Veronica Mars and watched the movie. Now I'm almost ready for the reboot that's happening in July! I do have the two books to read first, and I'm going to try and do them on audio because Kristen Bell narrates the first one herself and my favorite narrator, Rebecca Lowman, reads the second.


I had a couple of interesting cookbooks from the library this month. One was Jamie Oliver's new 5-ingredient Quick and Easy cookbook. I made 3 dishes from it: Hoison Chicken Lettuce Cups, which were delicious; One-Pan Fabulous Fish, also great though it made a lot more rice than I was anticipating; and Mango Rice Pudding, tasty but maybe a bit too strong-flavored for me.

I also had a copy of 30-Minute Mediterranean Diet, which I had to return after trying only one recipe. It was good though - Easy Italian Orange and Celery Salad. I only picked it because I had a lot of celery hanging around but boy, it was good. It also has red onion, blood oranges, and olives which sounds like it wouldn't be delicious together but it is. I'll definitely make it again as I very much enjoy a crunchy salad rather than a pile of leaves. It has very few pictures compared to most modern cookbooks, but I would really like to get it again and try out some more of the recipes.

Other recipes of note that I made this month include the Hearty Tuscan Bean Stew from the America's Test Kitchen Cooking School cookbook, which was very good but would have been better if the beans were fully cooked. You use dried beans, soak them overnight, and then cook them for quite a while but I guess you really need to try a few before determining that they're done. I also made Tomato Sauce with Butter and Onion from Food52 Genius Recipes, which I'm pretty sure I'll be adding to my repertoire. It was super easy and pretty delicious.


All the tv watching and some of my audiobook and podcast listening has provided a good backdrop for knitting, so I've made some real progress on my Na Craga sweater. I haven't yet really worked on my second sock though.

I attended the Massachusetts Library Association conference and attended every session of every day. It was one of the better conferences I've been to in a while, but so exhausting!

I also recently we went to see a new musical called We Live in Cairo. It was all about the Egyptian Revolution of 2011, and I learned a lot about that situation and its aftermath that I didn't know and really enjoyed the music a lot too.

My month is ending with a camping trip, which I'm very much looking forward to. We got a campsite that requires hiking 1/2 mile to get to and that means carrying all our stuff in frame packs but I'm very excited that we'll be fairly isolated from other campers. I keep joking that we're all going to get eaten by bears, but in reality I'm actually really afraid of bears. But I won't let it stop me from having a good time.


Honestly not a lot that I can think of beyond the camping trip. I just want nice weather!

How was your May?