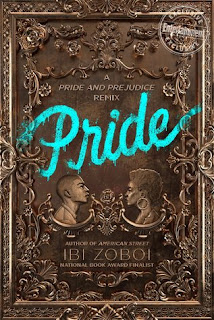 Just after finishing American Street, I downloaded Ibi Zoboi's newer book, Pride. Given how much I liked the first one, I suspected I might also like her Pride and Prejudice retelling.

Lizzy Bennet is now Zuri Benitez, who lives in the Bushwick section of Brooklyn with her older sister Janae, and younger sisters Marisol, Layla, and Kayla. It's very easy to see who's who. Their names are similar to those in the original, as are their personalities, but in an updated way. Marisol is the serious one, but her specialty is finance. Layla and Kayla are just ridiculous, boy-crazy younger sisters, much like Lydia and Kitty. Their mother is very interested in the Darcy family who just moved in across the street and encourages her daughters to pursue the brothers, Darius and Ainsley.

Although the characters are plot are similar to the classic we all know and love, Pride is very much its own story. The Benitez family has Haitian and Dominican roots, and her culture is very important to Zuri. So is her neighborhood. When the Darcys move in, she can tell right away that they don't belong. They are rich and dress like dorks and talk like white people. She's very protective of her neighborhood and way of life; in fact, she has a pretty limited worldview and isn't even interested in experiencing life outside of Bushwick. She doesn't like Darius, but keeps running into him, especially since her sister Janae is so smitten with his brother Ainsley. Of course it's inevitable that Zuri and Darius will get together eventually, but without ruining anything I'll say that the ending wasn't what I expected. Much like the classic upon which it is based, Pride is about growing up and how your family changes, and there's are some pretty big changes for her family.

The audio narrator was great! In fact, Elizabeth Acevedo is the author of The Poet X. I suspect she was chosen for this book because there's poetry in it. Zuri is a poet and even ends up reading a poem in public while visiting the campus of Howard University. I was very glad I chose to experience the audio version.

I probably got a little too distracted comparing Pride to Pride and Prejudice, but it's pretty hard to avoid if you're familiar with the Jane Austen story. Just know that even if you're not, you're still in for a good story that stands on its own.
Posted by 3goodrats at 9:16 AM