Five Days at Memorial: Life and Death in a Storm-Ravaged Hospital by Sheri Fink (2013) 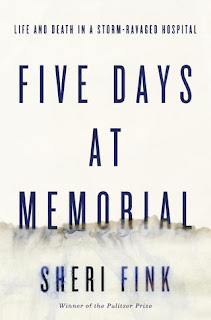 When Hurricane Katrina struck New Orleans, Memorial Medical Center was flooded and lost power. Backup generators were of limited help. Temperatures rose. The occasional rescue vehicle came and could only take a few people at a time, and staff had to make decisions about which patients should leave. As the situation became more desperate, the hospital was in survival mode. Treatments and routines halted as the focus was just on keeping people alive and hopefully getting evacuated. But poor communication and lack of disaster protocols both inside the hospital and out meant there was no clear directive and staff didn't necessarily know what was going on. It seemed as though some of the sickest patients were doomed to prolonged suffering and, ultimately, a certain death. Somewhere a decision was made to inject them with drugs that not only eased their suffering but hastened death.

It seemed like an impossible situation, one without clear leadership or a coherent plan. The hospital's parent company told staff to wait for the National Guard. But the government was also responsible for trying to rescue everyone else in New Orleans too, and didn't have the resources needed. Poor organization surrounding the rescues: helicopters, to save time and fuel, transported evacuees to just beyond the flood zone where, it was hoped, ambulances would meet them to take patients to hospitals. But those ambulances didn't materialize. Some helicopters were being turned away when they approached the hospitals helipad, but by whom? And why? There were still patients inside in poor shape who needed to leave.

All this was described in the first part of the book; the second part was devoted to the investigation and legal fallout that came later. One doctor in particular, Dr. Anna Pou, was implicated in possibly euthanizing patients and she became the focus of the investigation. She was a well-respected head and neck surgeon who was known to care deeply for her patients. Could she have possibly taken lives? Was the situation that desperate?

Fink provided a lot of context for the story and the issues. She began with a brief history of Memorial Hospital, described how some of the patients were actually patients of LifeCare, another hospital that had space in the Memorial building, a setup that didn't help communication when crisis came. She also described the medical community's code of ethics as it pertained to euthanasia, and the history of why it's not a popular idea in the professional medical world. The investigation into the events at Memorial during Katrina was also meticulously described. I didn't actually find the second part of the book quite as page-turning, but I can't deny it was all helpful relevant information that was necessary to tell this story.

It's no wonder this book won a Pulitzer. The myriad issues make it so complicated, and Fink did an excellent job of bringing in different perspectives. The result is not an argument for whether or not Dr. Pou should have been sent to prison, but a nuanced examination of the situation and surrounding issues without any clear answers. As I read, I found myself agreeing with conflicting perspectives. When doctors talked about the importance of never doing harm and how clear that directive is under all circumstances, I agreed that wrongdoing occurred. But when one of the evacuated doctors is taken to an airport and realizes that's where patients would have ended up - not at another hospital - and they would have died from lack of care, I agreed that the situation was extraordinary and the regularly rules did not apply. When family members had been forced to leave the hospital bedside of their loved ones to evacuate, only to find out later their loved ones had been injected with morphine and died, I felt the injustice along with them. And so on. When all was said and done, I think I came away feeling like people made mistakes, but they weren't heartless killers. They were doing the best they could under the circumstances and truly didn't want their patients to experience prolonged suffering only to die anyway.

There is so much to unpack and discuss in this book. I'll be thinking about it for a very long time.
Posted by 3goodrats at 9:34 PM