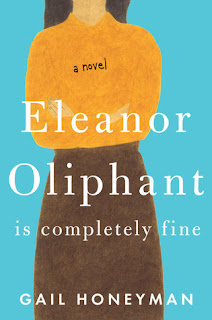 Eleanor lives with an unwavering order and routine. She goes to the same job she's had her whole adult life, and where she maintains a professional distance from her coworkers. She goes home and eats the same dinner every night. She does the crossword puzzle, reads a book, listens to the radio. On the weekend she drinks vodka and stays in a haze until it's time to return to work. On Wednesday evenings her mother calls her from prison and they talk for 15 minutes.

But then two things happen that begin to break Eleanor out of her routine: one, she develops a mad crush on a musician and becomes convinced that he is her destiny; and two, Raymond from the IT department befriends her and they end up in the right place at the right time and help out an elderly man who has collapsed in the street. Now Eleanor has a social circle including Raymond, the older man, Sammy, and his family. Meanwhile, she has begun a project of self-improvement meant to help her secure the musician with whom she is obsessed. These changes disrupt the order she has been accustomed to, and dredge up feelings and memories from the past that she has forced to stay buried for far too long.

Eleanor is socially awkward, not at all self-aware, and judgmental. Early on, she described her office manager Loretta: "She has overinflated ideas of her own administrative abilities, and in her spare time makes hideous jewelry, which she then sells to idiots." She often makes such proclamations, sure of her opinions and using a formal, lofty language that she apparently got from her mother, who also has firm ideas about how things should be done and lives should be lived.

But her honesty and pragmatism are endearing. She is nothing if not sensible, her carefully-maintained routines assuring fiscal responsibility and a generally low risk life. Although she keeps a careful distance from people and is often bewildered by them, she has more of an understanding with animals. "If I'm ever unsure as to the correct course of action, I'll think 'What would a ferret do?' or, 'How would a salamander respond to this situation?' Invariably, I find the right answer."

It's not hard to see why her colleagues kept their distance, but not so with the new IT guy, Raymond. From the first time she called upon him for help, he reached out in friendship, apparently unbothered by her polite but cold demeanor. He kept reaching out to her and despite her initial distasteful view of him, she warmed up to him a little. They were together one day when they saw an older man collapse in the street, which set off a chain of events that resulted in more human contact that Eleanor was used to. They visit Sammy in the hospital, where they meet his grateful family who befriend both of them and begin inviting them, together, to family occasions. This leads to Eleanor meeting Raymonds mother, a stark contrast to her own. "She was, quite simply, a nice lady who'd raised a family and now lived quietly with her cats and grew vegetables. This was both nothing and everything."

Her hard shell begins to crack, her meticulously crafted life melting in the warmth of human companionship. This only works to dredge up the dark secrets she has kept buried for so many years, and reveals the full extent of the toxic relationship with her "Mummy." She has put off dealing with the truth of her life for so very long, but now she is able to handle it with the help of the friends she has finally allowed into her life.

Both heartbreaking and humorous, this is a novel about the ultimate unlikable, quirky character. I knew I'd like this book from the time I first heard about it but somehow just didn't get around to reading it. I finally got to it for my 2019 TBR Pile Challenge. It reminds me a lot of books like The Storied Life of A.J. Fikry, Where'd You Go, Bernadette, and Sourdough: books about socially isolated people going through transformations, told with a certain quirky humor that I like. I don't know what you call this genre, but I want more of it.
Posted by 3goodrats at 9:19 AM