The Soul of an Octopus

The Soul of an Octopus: A Surprising Exploration Into the Wonder of Consciousness by Sy Montgomery (2015) 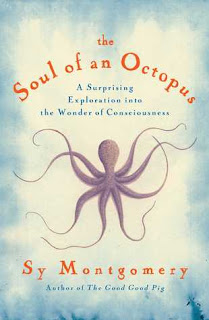 In truth, I put this book about octopuses on my To Read list after hearing a couple of co-workers talk about how good it was, but I didn't think I'd ever actually read it. Recently though, I impulsively picked it up at the library and actually read it.

It's not just a book about octopuses, but rather a memoir about one person's experiences with octopuses. This made it much more readable, though maybe not as informative. Sy Montgomery began visiting with octopuses at the New England Aquarium in Boston, hanging out with the staff there and getting good quality time up close and personal with the octopuses. She also learned to scuba dive so that she could observe octopuses in the wild. Along the way she learned a lot about the creatures and formed attachments, which made it pretty painful when they died, sometimes unexpectedly.

The book lacked some basic information that would have been helpful. Like she refers to them as mollusks and as cephalopods, but doesn't ever explain how those two categories relate to each other (cephalopods are a class of mollusk, but I had to google that.) She also doesn't go over basic anatomy, just making a reference to the head and body not being where we expect, or something along those lines, and says that the beak is in the armpit - these are confusing concepts and a basic diagram would have helped. Again, I just googled.

What bothered me the most - and almost caused me to abandon the book - is that she talks about how intelligent and complex and emotional octopuses are while not acknowledging the cruelty of removing them from the wild and keeping them in captivity for the education and enjoyment of people like her. In one case, an octopus was kept in a small, dark pickle barrel for around 7 months, with little access to mental stimulation aside from visits from humans. She kept talking about the octopuses trying to escape, saying they were "uncooperative" or "mischievous" when in fact they were basically imprisoned and just wanted to get out and go home.

But I stuck with it anyhow because it was interesting and I find sea creatures fascinating. Ultimately I'm glad I did read the whole thing. There was actually a point where another person in the book spoke to the idea of keeping the octopuses in captivity, saying that this is how people learn about these animals and, in turn, come to care about protecting them and the oceans they live in. Which, ok, I've mulled this over in relation to zoos too, and I'm not completely on board but I do kind of get it.

The most immediate affect of the book is that it gave me an overwhelming desire to watch Finding Nemo again (we own a copy and have watched it about 47 times and no, we don't have kids) and I immediately did so the very evening I finished reading the book. Man I love that movie. I also want to read more books about ocean life, so if you know of another easy-to-read book along these lines, please let me know.
Posted by 3goodrats at 12:29 PM