My One and Only 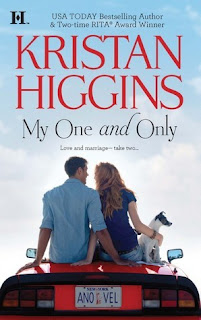 Harper James is a divorce attorney who is skeptical about love. She's never gotten over her youthful failed marriage to Nick Lowery, and now she spends her days urging people to get their "hearts to accept what their heads already know." Suddenly her younger stepsister Willa is getting married to a guy she just met and Harper has to leave her home in Martha's Vineyard to attend the wedding in Montana. And it turns out that Willa's groom-to-be  is none other than Chris Lowery, Nick's brother.

Harper, along with her dog Coco and her boyfriend Dennis, heads to the wedding, dreading running into her ex-husband. Especially now that Dennis has so recently turned down her marriage proposal. She's also very upset that Willa is getting married for a third impulsive time. By the end of the weekend, Harper and Dennis have broken up and Harper finds herself unwillingly on a road trip with Nick who is just as attractive as he ever was.

I'm already a fan of Kristan Higgins, having read my way through the Blue Heron series and the more recent (non-romance) Good Luck With That. This is an older stand-alone romance that I picked up at a used book store ages ago, and I kept putting it off because I was afraid it wouldn't hold up to Blue Heron. (I had cause for concern as I tried reading Just One of the Guys from 2008 and couldn't get through it.) I needn't have worried. This novel was not only as good as my other favorites of hers, it may have been even better.

This story is complex. We have Harper's history with Nick, their passionate young relationship and disastrously short marriage, which has left them both a mess emotionally. Harper's problems go even deeper, back to her mother walking out on the family on Harper's 13th birthday. This story is a big part of the novel too, coinciding with marital troubles between Harper's dad and his wife BeverLee. Not to mention Harper's current relationship with Dennis, a sweet firefighter who she wants to marry only because it seems practical somehow, having long ago lost any romantic notions about true love. Dennis sports a rattail and calls her "dude," but she is grudgingly willing to overlook these details. He's really not a bad guy at all, and honestly deserves somebody who loves him more than Harper does.

I like how unusual the premise of this story is: it's a romance between people who used to be married, and when the story begins one of them is still in another relationship. Their (half- and step-) siblings are marrying each other, and Harper disapproves. When they meet at the wedding, she and Nick immediately start bickering with each other, volleying insults that were, frankly, kind of hilarious. Plus she lives in Massachusetts and he lives in New York so they have that whole Red Sox vs. Yankees thing going on. But also there's all this interesting family stuff, like with Harper's mother - who she ends up seeing for the first time in decades during this story - and her stepmother. BeverLee is from the south and she's very bubbly and chipper and uses a ton of hairspray and is super excited that her daughter is getting married, even though she barely knows the guy. But she's also loving and loyal and, as Harper eventually realizes, more of a mother to her than her biological mother ever was.

I just loved all of this - the emotional depth, the difficulty of these relationships, the acknowledgement of how hard you need to work to make relationships last. Nick and Harper have a whole painful history they need to grapple with, and even that is not enough because if they're going to start up again they have to figure out how to make it different this time. When they were married, Nick worked all the time, leaving Harper feeling alone and neglected. She, in turn, made a life for herself that was very separate, not even telling her new friends that she was married. They need to make sure they won't fall into the same patterns.

Other elements that added to the story were the beautiful descriptions of Montana and Harper's comparisons between its natural beauty and that of Martha's Vineyard, and Higgins's trademark humor. I could have used a few less instances of the word "boobage" (zero would be perfect), but her funny zings and quips more than make up for it. This is probably one of the better romances I've read, and I highly recommend it.

As I said, I've had this paperback sitting around for a while, so I put it on my 2019 TBR Pile Challenge. Amazingly, I only have 3 more books to read for the challenge this year.
Posted by 3goodrats at 4:37 PM