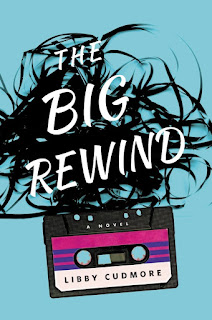 Jett Bennett opens her mail one day to find a mix tape addressed to her neighbor, KitKat. When she goes downstairs to deliver the misdirected package, she finds KitKat dead on the floor in a pool of blood. Her boyfriend is the first suspect, of course, but Jett is convinced the mysterious mix tape is a clue so she decides to try and solve the case herself.

This neighborhood and all its inhabitants seem to be super retro hipster, and at first I was a bit put off by the vibe. But that changed pretty quickly as I got into the story. Music is a big theme here so there are lots of artists and songs mentioned, some of which I even recognized. (I am not nearly as cool as Jett and her friends.) Jett listened to Warren Zevon a lot actually, which really takes me back.

Although Jett moved to New York because she wanted to be a music journalist, she was temping as a proofreader (and sometimes a purchaser and launderer of women's lingerie for a guy who wanted discretion regarding his choice of undergarments.) She was BFFs with a guy named Sid who falls in love with a stripper just as Jett starts to realize she is falling for him. So, little bit of murder mystery, little bit of angsty love, lots of fun.

Interestingly, Jett's proofreading job is for a PI firm, and she occasionally tries to get some advice from one of her coworkers about the case. Mostly she was on her own though, following the path of a mysterious song on a mix tape, hoping it will bring her closer to KitKat's murderer. I liked how this story shaped up, and how I didn't expect it to end up where it did. I also like that it didn't have the suspenseful tone of other mystery stories I've read. It was a fun enjoyable novel that happened to be a mystery.

Jett was easy to like, totally relatable in that young person figuring themselves out kind of way, and a witty observer. At one point she describes "one of those boutiques that carries only four items, none of which are in your size." She also mentions being stressed out and trying to calm herself with breathing exercises she learned in a yoga class in college. "I got a B in that class. Who gets a B in yoga? Someone who can't calm down, that's who." At other times I felt like she might be a different species, like when she described a "tall, skinny blond guy with combed-back sharkfin ridges and rimless cheaters." I think she's talking about his hair and glasses? But suddenly I feel like I'm about 90 years old. I was surprised at one point to realize she's actually in her 30s, because she felt so far from me. I guess it's just because she's so hip.

I've had this book sitting around for a while - it was a gift I was planning to read last summer. Then recently I saw a blogger post about how much she liked it and it reminded me that I had a copy. It was a quick read, fairly light, fun, and refreshing.
Posted by 3goodrats at 7:23 PM