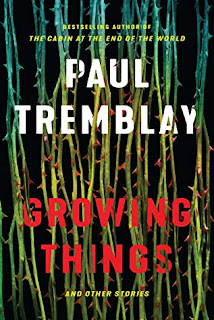 I've never read Paul Tremblay before, but saw him speak on a panel at the Massachusetts Library Association Conference in May. I went to the panel because Peter Swanson was on it, but also enjoyed hearing from Paul Tremblay and Katherine Hall Page, and grabbed copies of all their recent/upcoming books. Tremblay's Growing Things was just released this week.

The collection begins with the title story, in which two girls and their father are holed up in their house while some sort of out-of-control plant seems to be taking over the world. We don't get a lot about the bigger picture since we're just hearing from the girls' perspective, but of course that makes it all the more creepy and mysterious. And as I look back at it now, I realize the characters have the same names - Merry and Marjorie - as those in the final story in the collection, "The Thirteenth Temple." I can't immediately see how they're related, but I understand from the notes at the end of the book that Tremblay often writes stories set in worlds he has created previously.

"Growing Things" isn't the only story with an apocalyptic feel. In "Where We All Will Be," Zane is troubled by his father's suddenly odd behavior and compulsion to get in the car and drive towards...something. Everyone else seems to be doing the same thing, but Zane seems to be immune, perhaps because his brain is somehow different from other people's as they learned when he was a kid. "It's Against the Law to Feed the Ducks" is about a family on vacation, told from the perspective of a young child who can see that something very strange is happening, and we can tell it's some sort of doomsday scenario, but what? In a way, I'd love to know more about what is actually going on in this stories, but I don't think any explanation could improve upon the feels of uncertainty and apprehension Tremblay cultivates.

While those may be my favorites in the collection (I do love a good apocalypse) there are others that were also especially...effective. I can't say I love them since they make me so uncomfortable but they certainly do what they set out to do and I have a great appreciation for that. "------------" (which is an annoying title for a story) begins with a man enjoying a day at the beach with his kids. A woman shows up, acting super familiar like they know each other. He tries to figure out where he knows her from, feeling a little uncomfortable as she acts more and more like they are close, and he kinda wishes his wife was there. She also acts familiar with the kids, like she's their mom, and as the guys packs up to leave, she's all like "wait! don't leave me behind!" and gets in the car with them. All this time he's asking himself who this woman is and why she's acting like he should know her. It's so very unsettling.

A few of the stories are pretty experimental in form. "A Haunted House is a Wheel Upon Which Some Are Broken" is told like a choose-your-own-adventure, and "Further Questions for the Somnambulist" is pages and pages of three columns of questions and I don't quite understand it. "Notes for 'The Barn in the Wild'" reminded me a bit of House of Leaves, with its diary format and footnotes and underlined and crossed out sentences, like you're hearing the story in real-time, a stream of consciousness, complete with tangents and asides.

Some of the stories worked more for me than others, as is always the case with a collection of short stories, but I could almost always at least appreciate it on some level. I read the collection fairly slowly over a couple of weeks and was very unsure how to rate it on Goodreads, which is also generally a problem with short story collections. But now as I look back and remind myself about everything that I read, it seems clear to me that it's a pretty solid 4 stars. I think it's worth pointing out that Tremblay is a high school math teacher when he's not writing, and I love that his day job is so incredibly different - English teacher we'd expect, but math? He's most well known for The Cabin at the End of the World which recently won the Bram Stoker award, and which I should probably consider reading. He's clearly a very talented horror writer and I'm sorry I missed him up until now. I'm glad I impulsively grabbed a copy of his book!
Posted by 3goodrats at 11:36 AM