City of Girls by Elizabeth Gilbert (2019) 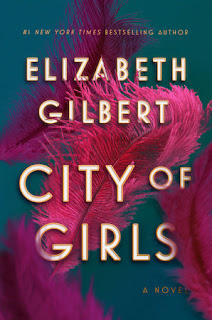 When Vivian Morris was kicked out of Vassar in 1940, her parents didn't know what to do with her, so they sent her to live with her Aunt Peg in New York. Peg owned a theater and lived above it, so Vivian was instantly thrust into a world very different from what she had known. Sewing costumes by day and partying with showgirls every night, her innocent eyes were opened and she embraced this new life. Until, that is, she makes a stupid mistake that destroys everything. The story is told from her perspective as an old woman to someone named Angela who wanted to know about the nature of her father's relationship with Vivian. Needless to say, it's a pretty long answer.

Through most of the book I had no clue who Angela's father was, and I began to fear that most of the story was completely unrelated to the relationship between him and Vivian, but actually it was all pretty relevant even though she didn't really know him during most of the significant parts. It still made sense, and it was satisfying. Even if it had been unnecessary to relate the whole tale to Angela it still would have been fascinating. Vivian's coming-of-age and subsequent scandal, and the long road of recovering from it, would have been enough without this outer story in which she explains it all to Angela, but that was like the extra icing on the cake.

One of my favorite aspects of this story was all of the unconventional relationships. A lot of them come late in the book so I won't ruin the story by being specific, but there is an intense platonic friendship between a man and a woman, and two women who choose to live and work together and, when one of them finds herself accidentally pregnant, to raise a child together. I love stories in which people chose their own families.

Vivian, although off to a very shaky start, became unconventional in a way I couldn't help but admire. She was unapologetically promiscuous and has no regrets about remaining single all her life. After screwing up so young, she really figured out how to live her best life while not hurting anyone. (Her youthful transgression caused a lot of hurt, and she never forgot it.) Seeing her grow and learn throughout her life was the real heart of this book.

This is only my second Elizabeth Gilbert book (after Big Magic) and I was unsurprised at how much I liked it. She really has a way with words and imagery!
Posted by 3goodrats at 11:20 AM