June/July Wrap-Up and Plans for August About a week into July I realized that I had completely forgotten to do a monthly wrap-up for June. Usually I start the post about halfway through the month and just add to it until it's done, but I hadn't even started one. Things had been busy, and the previous weekend, the end of June, I had been unusually exhausted. (Which may have been Lyme disease, and not just laziness as I had initially assumed.) All this to say that I'm combining both months here!


Probably my favorites of the last couple of months were All the Ugly and Wonderful Things, Stepsister, and City of Girls.

I listened to both audiobooks of the Veronica Mars books in preparation for the tv show, and otherwise my listening was all podcasts. I've been listening to a lot of Pantsuit Politics (well, they just have a lot of episodes) and it's great but now that I'm freshly back from vacation I think one of the things that made it so relaxing is that I didn't think about news or politics at all. Now I'm struggling with how to maintain that relaxation without ignoring things that are happening. I need to be an engaged citizen, but also need to not be angry and stressed all the time.

I finished one book for my TBR Pile Challenge, which was My One and Only by Kristan Higgins. It was pretty good! Possibly even my favorite of hers, although some of the Blue Heron books are really good. I only have 3 books left for my challenge for the year and I'm hoping to read one of them in August.


I'm caught up with The Great British Baking Show, which is unfortunate because I really like it and want to watch more!

Jessica Jones season 3 is out so I've been watching episodes. I'm kind of over her shtick of being angry and bitter and drinking all the time, but still find the show oddly compelling

Another thing I might be over is Handmaid's Tale. I finished the season but ugh. I don't know if I can go on. I heard a rumor that it might run for 10 seasons, which is way too much. Gilead needs to not last that long. I thought this season might be the beginning of the end, but then it took a weird turn and now seems to be going nowhere.

Finally, I watched the new season of Veronica Mars that just dropped, and we will not speak of it ever again. It was just not great, and they made a decision that was stupid and reckless and a major character died who did not deserve to die and I don't think I can get past that.

In summary, please just make enough more of Great British Baking Show to satisfy all my tv needs because apparently everything else sucks.


Not a ton, really. Mostly some Mediterranean-style salads. I did try a new quesadilla recipe that was quite good, from Mark Bittman's How to Cook Everything Vegetarian. It's got chiles and beans and was easy and delicious. 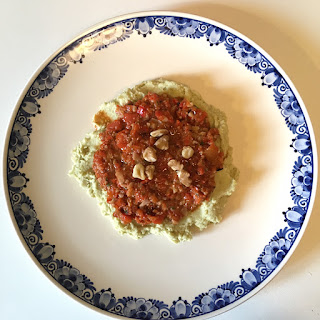 I made a few things from Ottolenghi's new cookbook, Simple, and they were quite delicious. Lima Bean Mash with Muhammara (picture at right), which is basically two dip/spreads that go really well together. The muhammara involves roasting red peppers, but it's still pretty easy. Then one day at the farmer's market I panicked and bought a lot of zucchini, which I don't even really like, because I can't shop that way. I need to go into a store with a list based on a meal plan, not just go blindly to a farmer's market, not knowing what they'll have. But the Ottolenghi book saved me - I made delicious stuffed zucchini with pine nut salsa, and also a Zucchini, Thyme and Walnut Salad from which I learned that raw, thinly-shaved zucchini is delicious. I guess I don't dislike zucchini after all!


We went camping over my birthday weekend at the beginning of June, and took the dog (man, that feels so long ago now!) Possibly got Lyme disease, as mentioned above, but it's uncertain because no medical person I saw was actually willing to test me for it, for reasons I still don't understand. I was exhausted for a couple of weeks but I'm fine now.

I finally visited the Royall House and Slave Quarters. I just heard about this place a year or so ago and didn't manage to visit last summer, but made it a priority this year. It was very interesting! I also follow them on Facebook and they post a lot of fascinating articles about black history - I definitely recommend following them.

In July I went on a cruise to Bermuda with my niece (a replay of our 2017 trip) It was so incredibly relaxing. I didn't realize how exhausted I was, even before the possible Lyme disease, but now I see how much I needed that vacation. We're not beachy people, but we did check out Horseshoe Bay Beach, which we missed last time because it poured that day (photo is at the top of the post.) We picked the best day to go (for us) because it was only partly sunny. We stayed for over AN HOUR. The next day we went to Crystal Cave, which was the inspiration for Fraggle Rock. It was very cool!


Nothing in particular, really. Some doctor's appointments and a haircut.

How were your June and July?