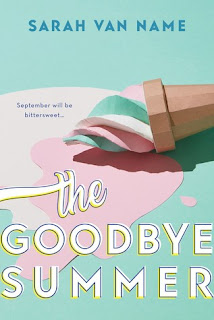 Caroline is spending her summer working at the gift shop in the local aquarium, but come fall she'll be seventeen and she plans to skip town with her boyfriend and go start a new life together. Of course it's a big secret, so all summer her parents and her new friend Georgia from the aquarium are trying to talk to her about college applications. It's very awkward but she knows what she wants, and that's to spend the rest of her life with Jake.

Jake is out of school already, working in a grocery store. The two of them are saving up, and making plans, trying to decide where they want to go. A bit much is made of Jake being "older" - he's literally two years older, and we all knows boys are less mature than girls, so they may as well be the same age. To the reader it's clear that the right choice would be not running away with Jake. Their plans are uncertain and dropping out of high school just isn't generally a great idea. I really appreciate, though, that Van Name chose to make Jake a good guy. It's not one of those heavy-handed situations where you want the person totally out of the relationship. It's easy to see why Caroline would want to be with him. He's a decent person who generally treats her well. I also appreciate that they have sex. Too many teen books like to pretend that teenagers are rational about sex and want to hold off until they're "ready," and of course everyone acts like it's a huge big deal. Caroline and Jake have sex and they are responsible about it and nothing bad comes of it. Thank you, Sarah Van Name, for acknowledging that possibility.

Much of the reason why Caroline begins to reconsider her plans with Jake relates to her new friendship with Georgia. She had been growing apart from her other friends, primarily because of the time she was spending with Jake, but since Georgia is a coworker they began hanging out a lot during their lunch breaks and then also in the evenings. Georgia isn't very happy with her home life and never wants Caroline to come over, so they usually hang out at Caroline's house. Georgia's parents are ok, but they just pressure her a lot. For instance, she has to spend every single Sunday taking a four-hour practice SAT test. Georgia is very focused on college applications, which puts even more pressure on Caroline. Their friendship is fairly intense, and Caroline doesn't like the idea of leaving her new friend behind.

I liked that this addresses the idea of having a relationship get a bit too intense when you're pretty young, without turning it into something dark and abusive. Obviously those kinds of relationships are all too real, but so is this and I don't see it represented a lot. This young woman is really wrapped up in her boyfriend to the point that she's not putting her life first. I get that she doesn't know what she wants to do with her life (who does at 17?) but she's considering throwing away some opportunities for a vague dream of married life. It's hard for her to see why it's not a great idea. I thought the author did a good job of capturing the nuances of the situation.

If I had to criticize anything, it's that Caroline doesn't ever eat. There was a point when on a Monday morning she realized she hadn't eaten since Saturday night. First of all, I hate that there are so many female characters who just "forget" to eat all the time, or every time they're upset they can't possibly eat. I think it's safe to say that most of us actually eat our feelings, right? But she also just hardly ever ate lunch, for no apparent reason, and this unhealthy behavior wasn't addressed at all. And oh, I was also annoyed that one of the tour guides at the aquarium just made up random stuff about the sea creatures because he didn't actually know anything about them. (But I'm a librarian and I hate seeing misinformation spread by idiots.) But these are minor annoyances that didn't really impact my enjoyment of the book.

Altogether, I found this a quick easy read. It was a fun book for summer, entertaining but with real thought-provoking aspects.
Posted by 3goodrats at 8:23 PM