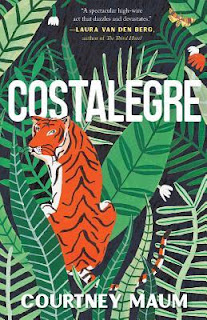 I wish I could adequately convey to you how satisfying I find the physical aspect of this book. It's smaller than your typical hardcover, and the cover art - which is gorgeous - is directly on the actual cover. There's no jacket. So ok, this isn't great for libraries because all our stupid stickers won't adhere directly to the cover, but from a tactile perspective, it's wonderful.

The story inside is based loosely on art collector Peggy Guggenheim and her daughter Pegeen, and I know very little about them so I can't speak to how closely it mirrors reality. Leonora is an American heiress who put a bunch of art and artists on a ship from Europe during the rise of fascism in the late 30s, with the plan to meet them at a house in the Mexican jungle. She and her daughter Lara, along with several other artists, are there awaiting the ship's arrival. The story is told from the point of view of 15-year-old Lara.

Mostly it is about the relationships between all the people staying in this house. Leonora had married one artist just to get him out of Europe, but he is in love with a writer who is staying with them. Some of the characters are insufferable and annoying to everyone, while others are beloved. Lara has a crush on an artist, Jack, and she is mostly ignored by her mother. Because we get the story from Lara's point of view there is a lot that we don't actually see. She's not sure what her mother's relationship is, or was, with some of the men. She's also not sure what has become of her father and brother who were left behind in Europe. Does her mother know more about where they are and if they'll also be coming to Mexico? Maybe. But her mother just kind of pretends that nothing bad is happening and focuses on art and parties. It's a very bohemian lifestyle they're living as they await the ship from Europe, and it's unclear what will happen when it eventually arrives.

There's probably more I could have gleaned from the story because I suspect we're supposed to read between the lines a bit, but to be honest I think the book is a bit too literary for me. I'm not sure I get the point or the message and not a lot actually happens. But it was fairly entertaining to read and it's so short that by the time I realized there wasn't a lot I was getting out of it, it was over. I will say, though, that Lara's narrative voice was strong and distinct and I probably won't forget it soon.
Posted by 3goodrats at 10:37 AM