The Body in the Wake

The Body in the Wake by Katherine Hall Page (2019) 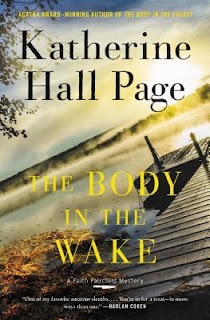 In May I attended the Massachusetts Library Conference where I went to a panel presented by three mystery writers. I totally went because of Peter Swanson, but I ended up getting books from the other two authors as well, Growing Things by Paul Tremblay and this newest book by Katherine Hall Page. I only grabbed it at the end after hearing her speak, because it turns out that the story takes place in my home state of Maine and touched a bit on the opioid crisis. I was intrigued.

Faith Fairchild has apparently investigated a lot of mysteries in this series, and this time she's really not trying to get involved but just happens to keep being around when bodies turn up. The first one in this book is a person unknown in the community, but who has been seen around town recently. Faith and her friend Sophie are out swimming when they find his body. He has a distinct tattoo, shared by the second body that turns up.

One thing that was confusing right out of the gate was the number of characters in the story and how they related to each other. This book is barely over 200 pages, yet in addition to the murder mystery is a storyline about Faith's friend Pix's new neighbors clear-cutting their land and the animosity surrounding that, the upcoming wedding of Pix's daughter Samantha and the arrival of her mother-in-law-to-be who is a ridiculous, snobby woman who wants to re-plan the wedding, AND a writing retreat at which Faith's daughter Amy works assisting the chef. There is actually a whole lot going on here. I was introduced to a lot of these characters in the first few pages and keeping them all straight seemed hopeless, so I just kind of let it go, figuring I'd get to know them and their relationships better later. That's pretty much what happened, so the confusion was kept to a minimum.

Her characters reminded me of some of the phrases Mainers use, like one character who commented on a meal "That is some good." I was less pleased about the gender stereotypes, like when after dinner one evening, the men and women separated to different areas to talk about things that wouldn't interest the others - I don't know if this was an attempt to captured some old-timey-ness that still exists in rural areas of what, but that kind of thing always rubs me the wrong way. I was also a bit annoyed when she referred to lobster fishing as a "lucrative operation" which tells me she hasn't done much research into what the fisherman are actually paid. (Very little - lobster is always an expensive menu item, but that money certainly doesn't go to the people who catch it.) But these were minor annoyances.

I liked this a lot more than I thought I would. I'll admit that part of it is because of my moving-back-to-Maine fantasy that is based on Maine summers, not the reality of the seemingly10-month long winters which I know well since I did live there for the first 22 years of my life. But this took place in an area I know, and everybody was so friendly in their little community, knowing everyone else's business and looking out for each other. Also they all had lovely houses with back porches that were apparently impervious to mosquitoes, and it was beautiful weather all the time. It's very obviously fiction, but I found it surprisingly pleasant to read.