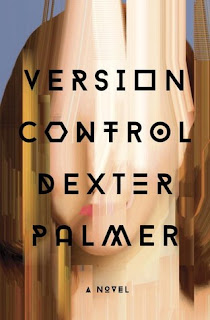 After a tragedy claimed their son, Rebecca and Philip got their lives back together. Rebecca has stopped drinking and has a job a Lovability, the dating site through which she and Philip met. But everything seems off to her, just a little bit wrong. Philip doesn't seem to share the feeling, buried deep in his work. He's a physicist working on something called a causality violation device - essentially, a time machine.

This is kind of a hard one to talk about without spoiling it, but I'll spoil one thing that should be obvious anyhow, which is that the device works and there is time travel. But Palmer has taken some of our usual assumptions about how that would work and what the rules are and changed them in a way that still makes sense but is different from anything I've read or seen about time travel before.

It's the kind of book that leaves me with questions, so many questions. After I finished I went to bed but kept thinking about it and was thinking about it when I got up. I immediately went back to the book and re-read a number of passages to make sense of everything. It does make sense, it's just that of course I didn't remember everything by the time I finished.

The story is about more than just Rebecca and Philip, though I liked their story a lot, especially how they first met through the dating site and Rebecca was put off by Philip's dry, logical messages to her. We also get to meet some of Philip's coworkers at the lab, Alicia and Carson. Rebecca's good friend Kate dates Carson for a time. Rebecca's father is a minister and enjoys having philosophical conversations with Philip - there's a good amount of philosophy in this book actually, which is not surprising given that the work of the scientists is so largely theoretical. Physics and philosophy seem fairly intertwined from the little I know about each of them.

It's set in the near future, and there are some things that are different from our own reality. The president, for instance, is always just barging in on people's tvs or phones or computers to talk to them individually. Super creepy. The country is on the verge of a Civil War as the Dakotas are trying to secede from the Union. There are cars that drive themselves, and the $20-bill has Ronald Reagan on it. It was kind of fun to see all the ways that things are different in their world.

I read this for my 2019 TBR Pile Challenge and what made me put it off for so long, I think, is that it's 500 pages long. But surprisingly, it goes fast. Unlike a lot of science fiction, this one is pretty character-driven which is something that makes any book easier for me to read. Also, once I got into it, I just couldn't put it down. I spent most of a beautiful summer weekend immersed in this book (some of that outside on my back porch, at least.) I'm glad I know a couple of people who have also read it because it's definitely the kind of book you want to talk about when you finish it!
Posted by 3goodrats at 8:59 AM