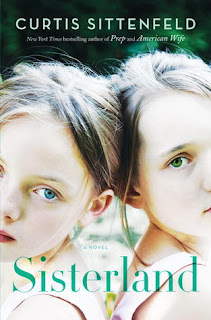 I love Curtis Sittenfeld, but when this book came out I was skeptical because it's about twin sisters with psychic powers. I don't believe in that and didn't think I could stomach a book in which I had to suspend that disbelief. But recently I came across it again, and I reminded myself that not long ago I read a book about a woman who flies through space in a giant shrimp and I thought surely I can manage a book with a little ESP. It turns out I needn't have worried about the psychic aspects, but there were plenty of things about this book I didn't like.

The premise is this: Daisy (who as an adult is called Kate) and her twin sister Violet have always had psychic abilities. In middle school Daisy was more open about it, but there were consequences to letting everyone know you could predict the future. As they grew up, Kate avoided using her senses and didn't tell people about them while Vi embraced hers and even started a career as a psychic medium. In 2009, Vi publicly predicted a serious earthquake and went on the news, creating a media firestorm. This caused a little friction for Kate because her husband and his colleague, Courtney were geologists. Courtney and Hank were also neighbors and the two couples were good friends since they both had little kids. They all thought that Vi was crazy.

So basically nothing happens for oh, another 200 pages, except for revisiting Kate and Vi's childhoods and Kate's really boring relationships pre-Jeremy. Why were we subjected to all of this? I have no idea. Also, we get a LOT of minutiae about Kate's day-to-day life as a stay-at-home mom to two little kids, which I absolutely could have done without. Then in the last hundred pages or so a bunch of stuff happens that I will spoil for you now: Kate has sex with Courtney's husband, the stay-at-home-dad she spends a lot of time with. This happens totally out of the blue without any thought for her husband, the fact that their marriage is actually pretty damn good, or birth control. She becomes pregnant, but also had sex with Jeremy around that time so she needs to figure out who is the father. This is important because Hank is black and if she has a black baby it will be pretty obvious that it's not Jeremy's. She didn't even consider an abortion (she is allegedly pro-choice, but was super judgey about Courtney having an abortion, so now SHE can't.) Anyhow, it's Hank's baby but she doesn't tell him; it is all handled stupidly and ridiculously and this WILL come back to haunt them someday, mark my words. Or it would if the book didn't end with them just suddenly moving to another part of the country.

Honest to god, Jeremy is too good for this woman. She was so uninteresting and wishy-washy about everything and really into judging other people when she is actually the terrible one. Maybe her sister Violet dropped out of college and wasn't great with money or whatever, but at least she's pretty honest and doesn't treat people so horribly. And I don't think the author actually intends for Kate to be seen as a bad person, but I can't find many redeeming qualities about her, and she doesn't learn or grow at all during the book. [Edited to add: She is also homophobic; and at one point says that Courtney is "more like a man" because she doesn't express her feelings. Gross.] Hearing so much about the day-to-day aspects of having two little kids, I couldn't imagine why she was happy to have a third kids. If anything ever made me feel good about my choices to not have kids, it's this book.

I mean, it wasn't horrible. I wouldn't have made it through if it was. Sittenfeld is a great writer and she created a whole cast of characters who felt real and it was fairly immersive for a while. But about halfway through I started questioning whether anything was ever going to happen and why the book was so damn long, and that went on for a while before all the stuff at the end started happening. So I guess pacing was a big problem. That and a main character I couldn't stand.

Anyhow, lots of people loved this book and maybe you would too. But it's by far my least favorite book by Curtis Sittenfeld.
Posted by 3goodrats at 1:52 PM