The Lightest Object in the Universe

The Lightest Object in the Universe by Kimi Eisele (2019) 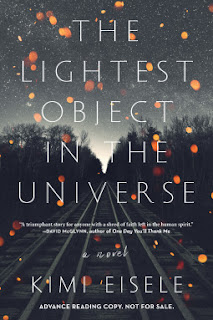 Hooray! A new post-apocalyptic novel! I first heard about this one from Kirkus Reviews, which said this about it:

"...given the current state of our deeply divided, heavily armed nation, it takes a stretch to imagine that, in the event of total international disaster, so much of the population would cheerfully turn to manual labor and generosity. It’s pretty to think that a global economic, political, and technological collapse could be solved by bike co-ops, backyard chickens, and a radio show about a homegrown superhero, plus a little true love, but this novel just doesn’t make it plausible."

My reaction? Sign me up! I'm happy to read a book about the collapse of civilization that has people rebuilding and helping each other rather than tearing each other apart. I've had enough of our deeply divided, heavily armed nation. Bring on the backyard chickens!

There are two primary characters: Carson, a teacher on the East Coast, and Beatrix, an activist and organizer on the West Coast. As things were getting dire, Carson promised Beatrix that if everything collapsed he would make his way to her. Then things collapse, and he set out on the road. Meanwhile, Beatrix had just returned from a stint in Central America and is putting her community organizing skills to work in her own neighborhood. There's this religious leader named Jonathan Blue broadcasting over the airwaves to attract people to the Center, where he promises all sorts of abundance. He's the only thing on the radio and Beatrix wants to counter his rhetoric with helpful information about growing vegetables, fixing things, raising chickens, canning, etc so she sets out to start her own radio station.

I love post-apocalyptic novels of all kinds, and this one felt to me like a cross between The Dog Stars and Station Eleven. That's really saying a lot, and I don't want you think it's necessarily as wonderful as either of those because I don't think it's quite as magical as either of them but it's a pretty solid 4 stars for me. It's not perfect - for instance, there are a lot of homeless people and I don't understand why. A lot of people were killed off by flu and a lot of other people left for elsewhere so surely there are empty houses and apartments? No need to live in your car! It also could have used a proof reader as there were a few noticeable errors. But it was a compelling story about the different ways people handle the collapse of society, and the hope that brings so many of them together to build a better future.
Posted by 3goodrats at 6:48 PM