The Wolves of Winter

The Wolves of Winter by Tyrell Johnson (2018) 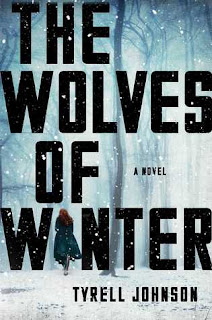 After nuclear war and a widespread deadly flu, Lynn lives in the Yukon with what's left of her family. She's in her early 20s, great with a bow and arrow, and pretty fearless. She misses her dad a lot and is kind of tired of being cold all the time and eating nothing but potatoes, carrots, and whatever they manage to kill. Now, after years of seeing no other humans but those in their makeshift settlement, a stranger appears and changes everything.

Jax arrives with little explanation, obviously hiding something, yet he seems trustworthy. It's not surprising though that where there's one newcomer, others will follow. Soon Lynn and her family feel like they are in serious danger from a world they thought they had escaped.

I was concerned about reading this immediately after another post-apocalyptic novel, The Lightest Object in the Universe, but it's very different story. I'm happy to say that they're both ultimately hopeful though. But The Wolves of Winter took place in an isolated area, so there's no rebuilding of society - in fact, there was an avoidance of society. Lynn's family moved from Chicago to Eagle, Alaska to the Yukon Territory to get away from everything when the world started going wrong. The nuclear wars were devastating enough, but it was the flu that really drive them out into the wilderness. They had no connection with any civilization and they were happy that way. Well, Lynn always knew she would end up leaving - she wanted to go find out where there were people and what was happening in the world. However, it turns out that there's a lot she doesn't know about the reasons her family left the city in the first place.

This was on my list for the 2019 TBR Pile Challenge. Now I realize it shouldn't have qualified because it was published in 2018, but it had been on my TBR list for more than a year because I added it pre-publication. Well, in my own head it counts. As a post-apocalyptic novel and one that takes place in a cold climate, it hits a couple of marks for me and I'd be very interested in a sequel.
Posted by 3goodrats at 1:46 PM