The Trauma Cleaner: One Woman's Extraordinary Life in the Business of Death, Decay, and Disaster by Sarah Krasnostein (2017), narrated by Rachael Tidd 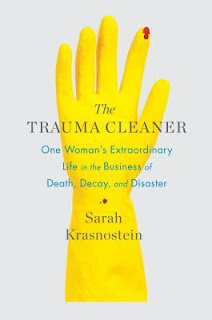 Sandra Pankhurst makes a living cleaning other people's houses, but only if there's been a death or a hoarding situation. She has specialized knowledge and equipment to deal with intense cleaning needs like bodily fluids, feces, and decomposition. This would all make her interesting enough, but she's also a transgender woman who transitioned back in a day when most people didn't realize that was possible.

Sandra's story is told by Sarah Krasnostein, who alternates between stories of Sandra's present-day work and her life growing up. She's in her 60s now and suffering from some pretty serious health problems, but she's still as lively and salty and competent as ever. This woman is super organized, knows how to talk to people who are justifying living in squalor, and has a deep compassion which is often tempered with an honest and often harsh attitude.

Krasnostein says that Sandra is not the most reliable narrator because she has a lot of problems with her memory and it made writing this book difficult. She did have help though, notably through interviewing Sandra's ex-wife Linda. They were together back when Sandra was living as a man and had two children before Sandra left. Their story was quite a sad one, with Linda's un-requited love for Sandra and the rift it left between Sandra and her children, who she was no longer allowed to see after the divorce.

But the worst part of Sandra's life had to be her childhood. Adopted by a couple with a daughter who weren't able to have more children, Sandra was welcome in the family until they were surprised by two more natural children, at which point Sandra was made to move into a shed in the yard and not allowed in the house after 4:30pm. They also apparently didn't feed her anymore. I don't know how parents can just stop loving a kid, or maybe they never really loved her, but they were just awful people. It was clear Sandra just wanted their love and acceptance and couldn't get it, and it only got worse once she came out as transgender.

I should mention this book takes place in Australia, but it sounds like the attitudes toward gay and transgender people is similar to in the U.S. It only makes Sandra's story more remarkable. There was a point in her 20s or 30s when she was working as a prostitute and she was raped and abused by a client - the most difficult part of the book to listen to - and she reported the crime. Shockingly, even though she was a transgender prostitute and this was the 1980s, the guy ended up sentenced to 6 years for the crime. What it must have taken for her to essentially lay herself bare in a court of law in order to see this case through really gives me pause. But Sandra was so matter-of-fact about everything; she knew how people felt about people like her, but at the same time had a strong enough sense of self-worth she didn't ever back down from a challenge.

Rachael Tidd reads the book with just the right notes of respect and empathy, as well as an Australian accent. I can't help but admire Sandra Pankhurst after learning so much about her, and the juxtaposition of her story and those of the clients she is helping gave me a lot to think about.
Posted by 3goodrats at 9:27 AM