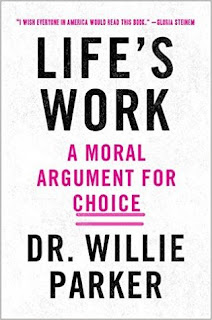 A fundamentalist Christian from the South, Willie Parker became an ob/gyn doctor. For a while he didn't perform abortions, but after being inspired by Dr. Martin Luther King Jr.'s interpretation of the Good Samaritan, he focused his career entirely on providing abortions. His philosophy is that he should be helping women who need it without judging them, and given how few doctors there are in the South who will perform abortions he now spends all his time there, traveling from clinic to clinic.

I was struck by a number of things while reading Dr. Parker's story. One was his complete and utter devotion to his work. Despite being legal and upheld by the Constitution, abortion remains controversial and a target, which means that Dr. Parker is also a target. He has had colleagues who perform abortion and have been murdered for it, or whose families have been threatened. This is one reason, he says, why he has not married or had children. I do wish he had talked a bit more about that because I didn't get a sense of how much of a sacrifice that was. Was he even interested in marriage? Did he avoid dating because of his job? It honestly sounds like he's so busy in his career that he doesn't have time for anything else.

Also, I was struck by his respect for women. He talks about how they know their own lives better than anyone else, and how by the time they get to the clinic (which is not easy, given how far some have to travel, and how hard it can be to scrape together the money) they've spent a lot of time thinking about their choice and he is confident that they're making the best decisions they can for themselves and their families. He doesn't question or judge those decisions.

There are situations, however, in which he will not perform an abortion. He won't do them after 25 weeks, but will refer the woman to someone who will. He won't do one if he thinks the woman doesn't actually want it, if he thinks she's being pressured by her partner or by a parent. Interestingly, he also won't do it if the choice is based on the gender or race of the fetus.

Another surprising thing about this book that I appreciated was that he explained the whole process of an abortion, which is something that nobody ever really talks about specifically. Although something like one third of women have had abortions, I imagine a lot of them go into it not knowing what to expect and for everyone else the whole process remains a mystery. It was good to see it all explained and know what is actually involved.

The book is about more than just his experiences; he also talks about political and societal issues. For instance, he is disappointed that the left has adopted the idea that abortion is always a sad, tragic choice. He feels like it doesn't do the pro-choice movement any good to assign such moral weight to a medical, practical procedure. He also talks about the fetishization of motherhood and children in our culture, and how we so often view birth as a miracle, when in fact it's just an ordinary biological process. This also only serves to fuel the anti-abortion movement. He feels that there's no intrinsic moral value to becoming a mother, or not becoming a mother. I totally agree with all of these views.

I found this whole book very enlightening and thoughtful and thought-provoking. I'm not very interested in religion, but I even found his religious evolution interesting. I can't help but admire Dr. Parker for his respect for women and commitment to justice. Many of us talk the talk about abortion rights, but he is really walking the walk. This is a great complement to another book I read not long ago, Pro by Katha Pollitt.
Posted by 3goodrats at 10:33 AM