Far From the Tree

Far From the Tree by Robin Benway (2017), narrated by Julia Whelan 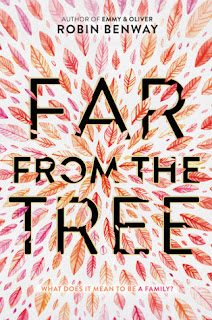 Robin Benway has really outdone herself and I have no idea why it took me so long to check out this book, given all the enthusiastic reviews I've read of it in the last couple of years.

It begins with Grace, who accidentally became pregnant and gave her baby up for adoption, spurring her to seek out her own birth mother. Instead, her parents put her in touch with her biological sister, Maya, and the two of them find their older biological brother, Joaquin. Grace and Maya were adopted as babies, but Joaquin, now 17, has been in foster care the whole time. His current foster parents want to adopt him, but he's afraid of what might happen based on past experiences. Maya is also having kind of a rough time, dealing with her mother's secret alcoholism and her parents' unhappy marriage. But all three are stronger now that they have the support of their newfound siblings.

I loved everything about this book. All of it. The characters were amazing and imperfect and different from each other, and I loved how the siblings are in totally different family situations but understand one another fundamentally because they were given up by the same mother. It was believable how they all hesitated to share their deepest secrets with each other for fear of rejection. Most of all I loved how they were there for each other when it really mattered.

We started with Grace and I found her story the most painful of all, I think. She was viewed by Maya and Joaquin as a total good girl, and she probably was. She had supportive parents, did well in school, and never got into trouble. But when she became pregnant by her boyfriend Max, his parents made it clear that they wouldn't let her pregnancy - which they viewed as totally Grace's fault - get in the way of his future success. While Grace labored to have their baby, Max was being crowned homecoming king. He had a new girlfriend and everything was perfect for him. Meanwhile, Grace no longer had friends, the other kids called her "baby mama" and a slut. She knew that giving her baby (who she thought of as "Peach") to a more adult, stable couple was the right thing to do, but she also felt guilty and worried so much about what would happen to her. Her desperate need to find her birth mother was partly just so she could let her know that she is ok.

Each one of these kids had a great story, made up of bad luck and misguided decisions, and it was really fantastic to see how they came together and helped each other, and to see their joined story unfold. Julia Whelan is an excellent narrator and I was glad to see her name on this book. If you like teen books or books about sibling relationships I highly recommend this one, and I also suggest you check out Robin Benway's other books because they're all great!
Posted by 3goodrats at 1:58 PM