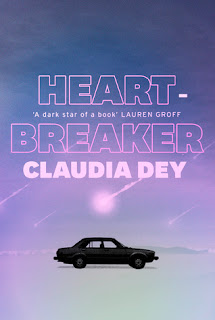 So it's 1985 and Pony Darlene Fontaine is the first of three narrators of this novel, the second two being a dog and a teenage boy. Pony lives in a place known as The Territory and nobody there has ever been outside except for Pony's mother, Billie Jean Fontaine, who arrived under mysterious circumstances. The book takes places over just a couple of days when Billie Jean goes missing, but it includes much more story than just two days worth.

The timeline can be hard to follow and it also gets a little difficult to keep everyone's relationships straight because they're all having affairs with each other and are also related to others in unexpected ways because of the affairs and the resulting secrets regarding who is who else's parents. I kept thinking something was happening in the present, but it turns out it was happening during some past event, or vice versa, which definitely affected my understanding of the story.

A lot about this book was confusing. This town was originally settled by a cult, but we don't know much about that cult. The people have some odd traditions and ways of speaking, which I assume is related to that cult that we know very little about. Also...ok, it's kind of a spoiler but it needs to be said: it doesn't actually take place in 1985, which I suspected from the beginning because nobody has contact with the outside world so how would they know about 80s trends and music? But it doesn't explain why they all have failed to keep track of what year it is. I mean, is it ALWAYS 1985? Or did they just restart their calendars in some weird year at some point? This is not explained and it bothers me.

At the same time, it's such a unique, unusual book that I can't help but admire this author's imagination. The traditions of the community are odd and mundane at the same time. The men all have nicknames given to them when they're teenagers or a little older, and those are the names they are always called afterward. Pony's father is known as The Heavy, and some of the other guys are Traps, Supernatural, Neon Dean, and Sexeteria. The girls wear necklaces with their names on it, and they are expected to own two tracksuits: one for inside and one for outside, but even the outside one is just for at home like if you're working in the yard. They always refer to coats as their "outerwear" and pajamas as "nightpants," both of which contribute to how stilted their language sounds sometimes. The teenagers all have to donate blood regularly, which is sold to the outside world and this is how the Territory survives financially. But they don't have any especially colorful beliefs about life, their origins, or the world.

There's tragedy though, so much tragedy. From The Heavy, who was burned badly when he tried in vain to save his parents and sister from their burning house, to the suicide of Pony's best friend's mom, to the death of a baby that is alluded to all through the book and about which we finally learn the truth near the end. Imagine living in a small, insular community where there are (almost) no newcomers and nobody ever leaves. You'll never meet anyone who you haven't always known.

In summary, I don't even know how to summarize my thoughts about this very odd book. I definitely enjoyed reading it, even though I didn't always quite understand what was going on, and it is certainly pretty different from any other book I've read. It's flawed, or maybe the flaws have more to do with my understanding than the book itself. It's hard to say. I'm sure this book is not for everyone, but if you want something really different, you might give this one a try.
Posted by 3goodrats at 8:53 AM