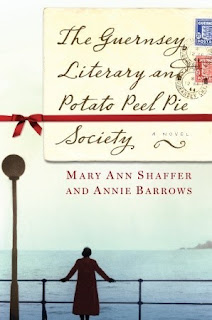 I'm really pretty late to this party. This novel came out years ago and was very popular and I don't know why I never read it but it was probably because the title is so twee? But something made me add it to my To Read list recently and I ended up grabbing a copy when I was looking for something historical and cozy.

Just after WWII ends, an author named Juliet is casting about for a book idea when she receives a letter from a man named Dawsey Adams on the island of Guernsey. He came across a used copy of a book that used to belong to Juliet (and had her name and address inside the cover) and wrote to her to ask if she knew what else the author had written. He also mentioned a literary group on Guernsey that started up during the war, which intrigues Juliet so much that she asks for letters and stories from other members of the group and, eventually, goes to Guernsey to meet them all. The novel is told through letters between Juliet and the inhabitants of Guernsey, her friend Sophie, her editor, and various other people.

It was all very charming, though also filled with pain as so many of the characters were at the beginning of recovering from the war. Notably absent was Elizabeth McKenna, a member of the Literary society and mother to a young girl named Kit whose father was a German soldier. Elisabeth was caught harboring a prisoner and taken away and nobody yet knows what happened to her.

The characters were all quite delightful and Juliet quickly came to love them and their home. During the course of the book, before she leaves London for Guernsey, she is courted by a publisher whose name I've already forgotten, but it's clear from the beginning that he's not right for her. He's all about fancy dinners and flowers and parties and is completely uninterested in her newfound interest in the people of Guernsey and their stories. You can guess early on who she's actually going to end up with, which isn't a criticism, but my real criticism is that it came about so abruptly. They pined for each other in silence and then in the course of one page they declared their undying love with no buildup whatsoever.

But the romance wasn't the important part of the book, and I did quite enjoy getting to know all the characters and hoping that Elizabeth would stay there after completing her book research. There were a lot of funny moments and some very sweet ones, and all in all it was satisfying. I don't think I loved it as much as most people (it was a bit twee) but it was fun and a good choice of reading during a weekend when I was sick.
Posted by 3goodrats at 9:28 AM