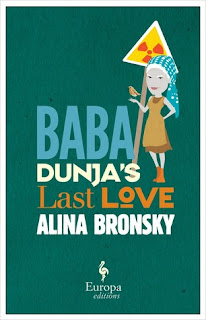 Baba Dunja had to leave her village of Tschernowo after the Chernobyl disaster, but a year ago she came back despite warnings that radiation levels were still too dangerous. Some of her fellow villagers followed her and now they are living out their remaining years in relative peace. But a stranger shows up in their midst with a little girl and seems ready to stay there, and Baba Dunja will not hear of a healthy child being brought to such a place.

At just 135 pages, this novella is a quick, fun read and packs in quite a lot. It opens with Baba Dunja being awoken by Konstantin, her neighbor's rooster, which is a great introduction to the way this small group of people put up with each other every day. There are fewer than a dozen people in this village and they rely on each other, so they must get along. Because of the radiation, their families can't visit and Baba Dunja writes to her daughter in Germany frequently and receives packages from her, but her greatest sadness is that she has never met her granddaughter Laura, and is unlikely to.

I thought the title must refer to a late-in-life romance, but that's not at all what this is about. I thought for a while it might refer to her granddaughter, but I think her greatest love is for her home. It's a hard life in Tschernowo too, with no stores, no telephones, and no buses. When Baba Dunja wants to go to the nearest town for supplies, she must walk a couple of hours to a bus stop so it becomes an all-day affair. The rest of the time she subsists on vegetables from her garden, in which she takes great pride. It's not an easy life, but she still loves it.

Although I read and loved another book by Alina Bronsky, I had no real plans to read more of hers. But one day I was looking for something on the library shelves nearby and came across this and felt inspired to read it. The dark humor is similar to that of The Hottest Dishes of the Tartar Cuisine, but Baba Dunja is not cruel like that book's protagonist, making the tone of this one much more positive. If you like dark humor, quirky characters, or Russian literature, I highly recommend this author.
Posted by 3goodrats at 11:57 AM