The End of Night

The End of Night: Searching for Natural Darkness in an Age of Artificial Light by Paul Bogard (2013) 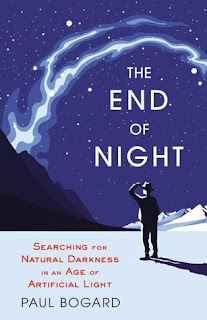 Several years ago, probably in 2013 when the book came out, I heard Paul Bogard interviewed and I've never forgotten it. He talked about how we have lit the world so brightly that it is difficult (if not impossible) to ever see stars, and that maybe we should reconsider the need to use lights everywhere, all the time. What stuck with me most was what he said about safety and security: that we often use these as reasoning for adding lights everywhere, but that it may actually make us less safe. I've thought about it ever since, but didn't think I'd ever have the motivation or stamina to read an entire book on the subject. What inspired me to pick it up was a recent trip I took to Maine; one of the things I was most looking forward to was seeing stars. It was overcast the whole time so there were none to be seen, and it made me think more about what I'm missing in the night sky by living in a city.

Surprisingly, I not only made it through the entire book, but I found it pretty interesting. Sometimes nonfiction books really could have been articles and they are heavily padded with excessive background information and tangents. When things started to get tangential here, though, it always retained at least some relevance and was always interesting. So although the book is about light pollution, I learned that there are still gas lamps and lamplighters in London, that once a Luna moth emerges from its cocoon it never eats again, and that when bats fly too close to turbines the pressure drop makes their lungs burst.

I learned about all the ways in which artificial light at night is bad for us and for animals. It upset circadian rhythms in most species, it negatively affects visibility with shadows and glare, and makes it easier to commit crimes at night because the people committing them can see what they're doing. There is apparently a possible connection between working night shifts and certain kinds of cancer, because we only produce melatonin while in natural darkness, and melatonin plays a role in preventing the growth of these types of cancer.

Paul Bogard visited many of the darkest places so he could see the natural night sky, and spoke often of the International Dark Sky Association which works to recognize places that have little or no artificial light at night. Some communities have taken steps to improve their lighting so it reduces the associated problems. It was surprising to learn about how inefficient and badly-planned lighting is in most places. But it was heartening to hear how many people are concerned about it and working to educate the public about these issues and make improvements in how we use light.

Part of me feels discouraged that I now have one more thing to worry about, but another part of me sees how easily the problems associated with light pollution could be solved with more education. We cling to our current practices out of ignorance about the issues. I found this book very easy to read for a nonfiction book without a linear story, and highly recommend it. Bogard makes a compelling case for preserving natural darkness, one that should interest anyone who cares about the environment and public health.
Posted by 3goodrats at 12:06 PM