Danger Close: My Epic Journey as a Combat Helicopter Pilot in Iraq and Afghanistan by Amber Smith (2016) 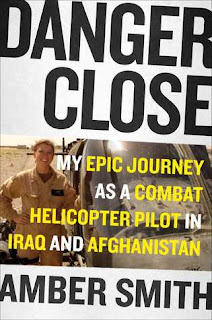 Amber Smith grew up in a family of pilots and learned to fly when she was still a kid. Then she and both of her sisters joined the military and became pilots. Amber writes about her experiences, starting with boot camp and flight school, through her tours of duty in Iraq and Afghanistan where she flew Kiowa helicopters. I never read books about the military, but I happened across this one several years ago when I was looking for books about helicopters. I think it was soon after I had taken a helicopter flying lesson and I was a little obsessed. (I am still a little obsessed.)

I was doubtful that I'd actually like this, to be honest. Interesting and talented people who have great stories aren't necessarily good writers, but Smith writes well. She was pretty casual about some of the training she had to endure. I know she enjoyed some of it, but some sounded terrible. Like in flight school where you have to learn how to get out of a helicopter if it crashes in the water - they strap you into a cockpit and dunk it into a swimming pool, repeatedly. She hated this. Survival school consisted of crawling through swamps, not eating for days, and drinking algae-infested water. I actually wanted to hear more about this, but she didn't dwell on this part for very long.

I'm not, and never have been, interested in the military. When I was growing up I couldn't fathom why anyone would do such a thing. In many ways that hasn't changed. But the way Smith wrote about her experiences, I could kind of see the appeal. I definitely see the appeal of flying, and the military is probably the best opportunity for that. But also there is a logic and order to the work that leaves no room for uncertainty. There are very specific procedures to follow for every situation, leaving no room for ambiguity. She tells one story in which she was out in her helicopter and waiting for orders from above and they weren't coming; finally she was forced to leave the situation to refuel. She says, "Indecision is a decision." For a moment I was almost jealous of how cut-and-dried her job is, but then I remembered that although I am faced with uncertainty at my job, I am in much less danger of dying.

My only criticism is that I think she glossed things over a bit. She was working under some pretty tough conditions. She mentions the heat in the Middle East, and the spiders (she's afraid of spiders and they have HUGE ones there) but somehow these were just asides. She didn't deny that it was hard, but surely she must have been scared at times and I wonder if she left out some things about how the guys treated her. She talks about how hard it was to fit in. She was one of very few women, but also she says that she smiled a lot and didn't try to be a badass, and that made it harder. I definitely respect that she didn't try to change too much to fit in. But I've heard some horror stories about the way women are treated in the military and I have to wonder what she experienced that she's keeping to herself. She describes some situations where men didn't take her seriously, and I think that if that was the worst she endured she is extremely lucky.

All in all, I found it pretty interesting. I went into it for the helicopters and I got a LOT of stories about the helicopters. It was pretty eye-opening in other ways too, because I just know so little about the military and I think I got a much better idea of what it's like day to day. As much as I try to read books about people who are different from me, those differences are usually based on race or country or origin or something like that. Amber Smith may also be a white woman in America, but she is definitely very different from me and I found her story surprisingly engaging.
Posted by 3goodrats at 12:48 PM