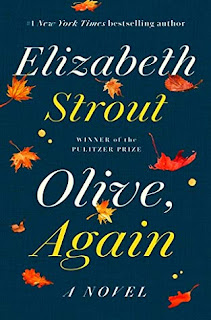 Olive Kitteridge is back in another set of connected stories that feels like a novel. We meet a slew of interesting characters as Olive finds love and marries for the second time, and the book takes us at least ten years beyond that. We see Olive get into her eighties and decline a bit, but she's not too old to make new friends and to maintain her straightforward, slightly abrasive personality.

It's been a while since I read the first book, but I think she stars in more stories in this one. There were still a few focused on other characters in which she only made a passing appearance, but she maintained a pretty strong presence. Somehow she felt more likable from the beginning of this book, but that may just be because I already got to know her and I know she's not the mean old lady some people find her to be. She doesn't have a great relationship with her son or his wife, so she hasn't even met her grandchildren at the start of the book. But they do end up having a family visit, a struggle that is eventually worth it.

I was pleased to see Olive begin a friendship with a man which turned into a marriage. We get so few stories of older people having relationships, and I like the reminder that romance doesn't have to stop past a certain age. I also enjoyed her new friendship with Isabelle (who we first met in the novel Amy and Isabelle.)

One of the things that so endears me to Olive is that despite coming across as aloof and even unkind, she speaks up on behalf of others. For instance, she had a rotating schedule of home health aides, and the first day that Betty arrived and Olive noticed that her truck had a bumper sticker promoting "that horrible orange-haired man" who is president, Olive told her immediately that they would not discuss politics. One day when Betty was relieved from her shift by a Somalian woman and was rude to her, Olive gave her a very firm talking-to about how she wouldn't have prejudice in her house.

It could have been depressing to see Olive get older, deal with health issues, and lose people she loved. But somehow it didn't. Perhaps because Olive herself didn't want sympathy; she knows that's just the direction life goes. I really enjoyed revisiting Olive and seeing that she isn't letting old age get her down.
Posted by 3goodrats at 7:26 PM