The Nature Fix: Why Nature Makes Us Happier, Healthier, and More Creative by Florence Williams (2017) 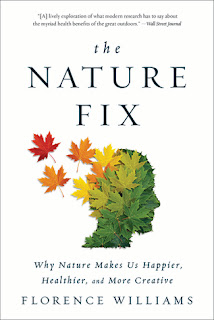 I first heard about The Nature Fix on the By the Book podcast, which you probably should be listening to if you aren't already. The two hosts live by self-help books for two weeks and then talk about it and have follow-up episodes where they share feedback from listeners. The Nature Fix is by no means a self-help book and now it's been so long since I listened to that episode that I don't remember how they managed to frame it into one, but it was a great episode about getting outside more and encouraged me to pick up this book.

It's arranged in five parts. Part one introduces the two dominant theories about why our brains benefit from nature; the author visits Japan and goes forest bathing, and then spends time in a Utah desert. The next three parts focus on the effects of spending different lengths of time experiencing nature. Part two examines short bursts of nature, like having forest views from your windows, using nature smells in aromatherapy, and listening to nature sounds. Part three focuses on the Finnish recommendation of spending five hours a month and how that affects your body and brain. In part four, she looks at longer forays into the wilderness through some pretty interesting initiatives such as an outdoor school for kids with problems like ADHD and a program that helps veterans with PTSD by taking them on several-day long whitewater rafting trips. In the final part, she examines what all of this means for how most people live, which is in cities, and how we might benefit from letting more nature in.

I am already totally on board with the ideas in this book. Even before reading it, I've been trying to take walks on my lunch break a few times a week (it's winter, but it's a really mild winter!) and I have vague plans to go snowshoeing, if we ever actually have snow. I might go hiking in a couple of weeks. I go camping every summer already. So I'm absolutely the audience for this book and Florence Williams is really preaching to the choir here. But since I listened to that podcast episode I've definitely been thinking about this more, and wondering how certain things affect me, for example, that I live next to a highway. I know that the longer I live here, the more chance I have of developing respiratory and cardiovascular diseases (I was even in a Boston Globe article about this. Yay me.) But now I'm also worried about the effects of listening to traffic constantly. So hooray - now I have even more things to worry about!

I found it disturbing to think about all this in the context of the way we now normally live our lives. Williams shared a lot of scary statistics about kids and illness and vitamin D deficiency and teen suicide and anxiety and depression. Kids stay inside so much these days that rickets, a disease that was once virtually eradicated (and which is caused by lack of vitamin D) has had an upsurge in both the US and UK. It's crazy to think that these issues could be dealt with by simply spending more time outdoors but that we'd rather just medicate everyone. For all our sakes, I really hope the solutions that Williams presents start to catch on.

There were other, more random, interesting bits as well. I was amused by an Oscar Wilde quote that I haven't heard before; he defined nature as "a place where birds fly around uncooked." I was also really intrigued by learning that in Finland the law allows you to traipse all over everyone else's land, pick their berries, and camp out (you can't cut timber or hunt game.) I bet a lot of Americans would be absolutely horrified to hear that, but I think it's kind of nice. Also, Thoreau bloviated about how in order to "preserve his health and spirits" he had to spend at least four hours a day just outside walking, "absolutely free from all worldly engagements" and if that's not privilege, I don't know what is.

Having said all that, and being totally on board with the ideas in this book, this is going to sound kind of strange, but I didn't actually love reading it. I did really like all the stories about the outside trips and forest bathing, and everything that took place somewhere outside of the US, but the science itself didn't really interest me a ton. I may also have really not been in the mood to read nonfiction at the time, which isn't the book's fault. So I guess I can sum it up by saying that I like the book but I love the ideas and it all reinforces something I already believe.
Posted by 3goodrats at 10:39 AM