Her Body and Other Parties

Her Body and Other Parties by Carmen Maria Machado (2017) 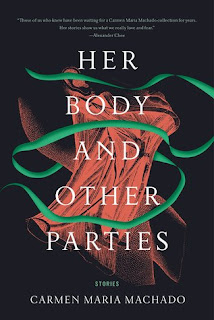 I am on a short story kick the past couple of months. I'm also trying to go back and read the books that have been languishing on my To Read list the longest, which is what made me pick this one up now. Several of my coworkers have read it and raved about it, but somehow I kept putting it off.

There are a total of eight stories in this book, and I'm sorry to admit that I read only seven and a half of them. One is a tediously long list of summaries of (fake?) Law and Order episodes, and it was amusing at first but I've never watched the show so probably am missing a lot of the point and also it went on for far too long. Finally I couldn't stand to read any more so after 35 pages I decided to skip the second half of the story.

Otherwise, the stories were great! They were weird and creepy and I often couldn't tell if something was actually happening or if the person was delusional in some way, but I liked that. Many of them are difficult to describe adequately.

"The Husband Stitch" is the story of a relationship and marriage, and the wife's refusal to explain to her husband why she always wears a green ribbon around her neck. In "Inventory" a woman recounts all her sexual encounters, and after the first few it grew decidedly dark as they all happened against the backdrop of an apocalyptic descent. The main character in "Mothers" has just been handed a baby by her female lover and now has to take care of it...but I'm not sure there is actually a baby. "The Resident" is about a writer attending a residency near where she attended Girl Scout Camp as a kid, and her experiences and the other people there are strange in a way that is hard to describe. It's probably my favorite in the collection, though it's hard to say what it's even about.

Machado's writing is a pleasure to read, and even the story I ultimately didn't like was actually written well, it was just far, far too long. They all have an otherworldly quality to them, yet are still full of sharp, palpable imagery. I'm sorry it took me so long to pick this book up.
Posted by 3goodrats at 10:07 AM