The Lady's Guide to Celestial Mechanics 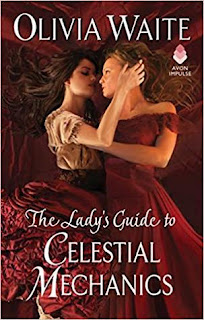 Our story begins with a wedding; Lucy Muchelney's lover for the past five years is getting married. Lucy is heartbroken that Priscilla has left her for a man who she doesn't care about, but she returns home to find a letter from the Countess of Moth that is sure to provide a welcome distraction. The Countess is looking for a translator for a French astronomy book; she would have employed Lucy's father, but now that he is dead she wonders if Lucy has a suggestion of another person who is well-versed in both science and French, who could undertake the translation. She does. But rather than try to convince the Countess by letter that she can do the work herself, Lucy decides she'd make more an impression if she presents herself in person. As it turns out, she does make a strong impression on the Countess, and soon Lucy has quite decidedly moved on from her heartbreak.

Catherine, the Countess of Moth, is a widow who isn't at all upset that her husband is dead. He was a bad-tempered, controlling man. He read her mail, so she wrote letters to her aunt in which she used illustrations of flowers to say what she didn't dare say in words. Speaking of flowers, she's a very talented embroiderer who perhaps would have been a botanist had she been a man. She doesn't take her gorgeous designs seriously until Lucy points out that what she does is art. After a time, Catherine begins thinking of her own potential, wondering if she is too old to start something new, and deciding to forge ahead regardless.

Much of the plot of this book surrounds this scientific translation and the politics surrounding the organization supporting it. It's a very exclusive organization that doesn't allow women, or believe that women can grasp science. The romance isn't fraught with angst, just a little doubt about their level of commitment since they can't get married, and of course there was a certain amount of secrecy required. But to be honest it was nice to see a relationship not steeped in drama. There was enough else going on the book that I didn't feel like I was missing anything, yet the romance remained the central focus.

I like that this book acknowledges things about the world that many people don't realize, like that there were times in history that gay people maybe weren't super ostracized, and that black people existed in history other than in American slavery. There's an older character in the story who reveals her love affair with a woman in her past, and she points out to Lucy and Catherine that society wasn't always so restrictive about same-sex relationships as is in their time. There were also a couple of black characters who were part of the scientific community. For some reason many historicals are very white and, of course, heterosexual and it has led to the idea that that's all there was. That's just not the case, and I like how this book acknowledges that without making a big deal out of it.

I found this story quite enjoyable, both the plot about Lucy's work and the related plot about her relationship with Catherine, and I liked how both characters grew and changed over the course of the story. I'd definitely check out this author again, and I'm happy to see that this is the first in a series.
Posted by 3goodrats at 7:36 PM