The Trespassers by Meg Mundell (2019) 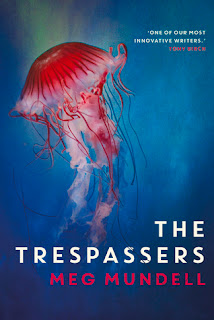 After extensive screening, a lucky group of passengers have been able to board a ship and leave an illness-ravaged UK for Australia. There they hope to start a new life with good jobs, but none are sure what really awaits them. Out at sea, a young passenger named Cleary stumbles upon the victim of a murder, and that's just the beginning of their troubles.

This story is told through three narrators. The first is Cleary, who has been deaf for three years since he was sick and who is traveling with his single mom. Billie is a former nurse, who worked in the death wards and is hesitant to talk about the circumstances of her departure from her job. Finally, Tom was hired as a teacher for the kids who are among the passengers, and has begun an affair with a crewman. Each of these characters brought a different perspective to this tale of migrants with an uncertain future.

During the time I was reading this book, I found my mind often wandering to this ship and its passengers. It was just one of those books that holds you in its grasp every moment until you've finished. Almost the entire book takes place on the ship, the passengers crammed into shared quarters, falling ill one by one even though they were so thoroughly screened before being allowed to board. The ship is not equipped to deal with the outbreak, and how the illness got on board is a mystery. There is a lot of fear in this story, and some struggles regarding authority and power, and uncertainty - so much uncertainty.

We don't really know much about the illness that has ravaged the UK or, as it refer to it in the novel, the former UK. This is set in the not-too-distant future, and reading it during the coronavirus panic and accompanying stories about quarantined ships made it feel less like speculative fiction and more like a prediction.

A friend brought this back from Australia for me as a gift because it's not available in the U.S. but I do hope it is eventually so that you all can read it. I certainly won't forget this story or stop thinking about the characters anytime soon.
Posted by 3goodrats at 12:55 PM