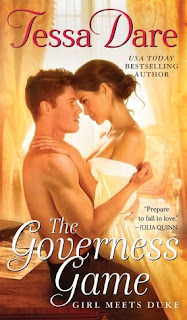 Alexandra Mountbatten has been on her own for quite a while since her sea captain father died, and she now makes her living setting clocks. But when she loses the instruments of her trade, desperation drives her to take a job as a governess for Chase Reynaud and his two orphan charges. Many a governess has passed through their house and Chase is ready to send the kids off to boarding school far, far away. He can't be bothered to deal with them himself; he's too busy seducing every female in the greater London area. That is, until he can't take his eyes off Alexandra.

Alexandra was a great heroine, with her interest interest in science, especially comets, and her friendship with other smart, single women. Before moving into Chase's house to take care of the two little monster girls, she lived with two of her best friends, who were both fairly eccentric single women. I also like that when Chase finally decides he's in love with her and asks her to marry him, she's like "Meh, it seems like staying single might be better?"

Chase is her employer, which I find a bit distressing (as do her friends.) The power unbalance, especially when so much is riding on her employment, is something we'd never tolerate in a contemporary novel. Chase is also a rogue, a character type I don't especially like. This is one of those situations with a sexually experienced man and a virgin heroine and I'm kind of sick of that whole setup. But despite that, I did really like both of them.

I'm also not a big fan of plot moppets, but although the little girls were just a way to help get Chase and Alex together, I thought Tessa Dare did a good job of making their story, and their relationships with both Chase and Alex, interesting. Alex knew what it was like to be unwanted, to be sent off to school, and to not know what the future brings. She was able to relate to these girls because she knew where they were coming from. She also abandoned thoughts of making them into proper young ladies and started teaching them piracy instead, channeling their natural interests to trick them into learning. Chase insisted he didn't care for the girls but every morning when they announced that their doll Millicent was dead (yet again) from consumption or dropsy or whatever illness Daisy was currently fixated on, he was right there at the funeral.

All in all, I found it to be a pretty well-crafted romance. Maybe not a favorite, but it was exactly what I felt like reading at the time and it was definitely satisfying.
Posted by 3goodrats at 10:30 AM