A Christmas Journey : a review

A Christmas Journey by Anne Perry (2003) 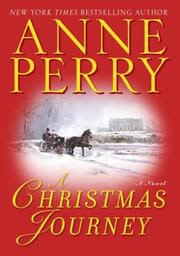 Anne Perry is my guilty pleasure. I secretly yearn to live in Victorian times and wear ornate dresses with constricting undergarments while attending balls and adhering to strict social standards. Ok, maybe not. But I really felt like slipping back in time and indulging in one of her historical novels, and this short Christmas-themed book was perfect.

Little festivity appeared in A Christmas Journey, however. It began at a country house where a group of friends gathered for a long weekend in early December. A budding romance between Gwendolyn and Bertie was cause for much speculation, but at least one person was unhappy with the situation. One evening Isobel made a cruel remark about Gwendolyn’s romantic motivations in front of everyone. Later, Gwendolyn’s body was found in the icy river, after having apparently thrown herself off a bridge.

Vespasia, our heroine, offered support to Isobel, now ostracized for her assumed role in Gwendolyn’s suicide. The two women set off on a journey to deliver Gwendolyn’s last letter to her mother along with news of her death. The journey is longer and more arduous than they had expected, and they learn a great deal about Gwendolyn’s shocking past.

Aside from brief mentions of Christmas at the beginning and end of the book, this was a normal murder mystery so it wouldn’t feel strange to read it at another time of year. It was a very short 180 pages, which I read in just over a day. A perfect quick cozy read! Anne Perry has written several short Christmas mysteries, and I’ll keep these in mind over the next several months - they’ll be perfect for snowy weekends.
Posted by 3goodrats at 8:24 AM