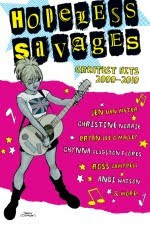 This graphic collection of comics follows 70s punk musicians Dirk Hopeless and Nikki Savage, who have married and moved to the suburbs to raise their 4 kids: Rat Bastard, Arsenal Fierce, Twitch Strummer, and Skank Zero. Usually referred to simply as Zero, the youngest of the family is the main character of the series.

In the first story, Dirk and Nikki are kidnapped and the kids must band together to save them. The second story is about the beginning of Zero’s relationship with Ginger. In the third story, Arsenal and Twitch travel to Hong Kong for a martial arts tournament but soon find themselves followed by local criminals. The final sections “B Sides” and “Bonus Tracks” contain shorter stories of earlier events such as the formation of Zero’s band, the Dusted Bunnies.

The family and their relationships take center stage – though they are unconventional, they are a strong family unit! There was a split at one point, when Rat rebelled and shed his punk exterior for that of a yuppie businessman, but in the first story he returns to the fold. I liked Van Meter's take on the alternative family, and her treatment of sibling relationships.

Mostly, I found the characters pretty likable. Zero has an odd proclivity to make up words, which was a little bit annoying, but as a character she is hard not to like and I found myself really rooting for her. There were a large enough number of characters that I didn't feel like I got to know enough of them, and I'd really like to. For a lot of the book I was just trying to keep track of who was who (I'm terrible at keeping characters straight!) but now that I have it figured it out, I'm ready for more.
Posted by 3goodrats at 6:51 PM